(The Weinstein Co.)
By Candice Winters 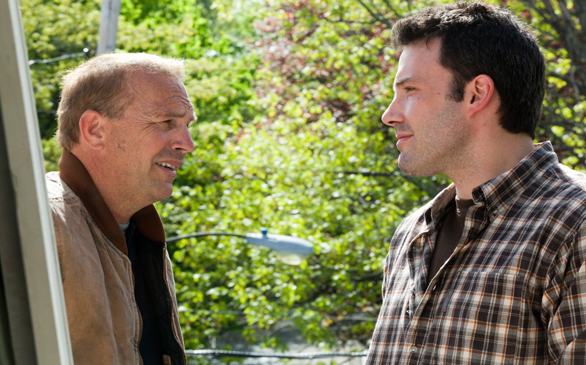 As if we didn’t need reminding. As if most of our lives are not consumed by the dominating question of how we will be making money, supporting our family and retiring easily. With the exception of the few lucky ones who hit the jackpot, these fears are valid. Recent films like Waiting for “Superman” have been adamant about pointing out the blaring misappropriations made by our government officials who are more focused on problems overseas than in our own country.

Although it is important for films to document these crises in our society, there are certain projects that depress us more than they uplift us. So is the case of The Company Men, a film with an all-star cast including Ben Affleck, Tommy Lee Jones, Kevin Costner and Chris Cooper. Despite acting that carries the dreary and often witless dialogue, the film is far overshadowed by the mood it sets, not on the screen, but in the theater.

Bobby Walker (Affleck) has been a salesman for over 12 years until his company starts downsizing to stay afloat. Entire divisions are laid off; even one of the founding members, Gene McClary (Jones), is fired by his best friend and CEO boss (Craig T. Nelson), who is raking in millions of dollars while the likes of Walker and 20-plus-year veteran Phil Woodward (Cooper) are forced back into the shark tank of the job market.

The film ultimately aims at drawing the common message that what counts the most is family, that work is only second to all else. The problem is, the film is top-heavy with downcast plot development. The players in the company are frantically looking for jobs but can’t find one. Walker eventually goes to work at his brother-in-law’s (Costner) construction company, doing the manual labor never required when he wore a suit to work every day. From this, of course, he learns the value of being present in the lives of his family members and how lucky he is to have them.

In the vein of Death of a Salesman and Glengarry Glen Ross, The Company Men is not of the literary merit of either, nor does this film adroitly provide a reasonable answer for the plague of company downsizing and the perpetually low unemployment rate. It has its moments of quick wit and fine acting, but they are ruined by the overwhelming state of depression that will leave you comatose as the credits roll.