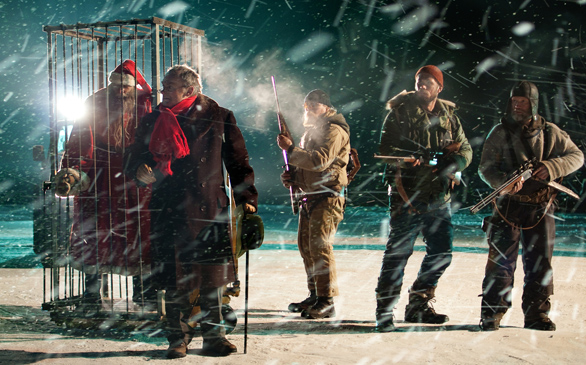 For an event as much a part of the human psyche and experience, the pantheon of great holiday movies is surprisingly empty. I can think of two, OK maybe three, holiday movies that hold up over time. It’s a Wonderful Life, A Christmas Story and Bad Santa. Maybe that last one doesn’t technically qualify as a holiday movie, but it took place during the holidays, Billy Bob Thornton dresses up in a red suit and there are plenty of Christmas references in the film, so I’ll make the case.

The problem, and there are many, seems to be a rigid adherence to some moral obligation or some other holiday cliché about the brotherhood of man. Finnish film Rare Exports: A Christmas Tale, written and directed by Jalmari Helander, does an exceptional job of throwing away the Christmas story playbook and starting from scratch to reimagine a classic childhood fantasy for the holidays. Helander manages to artfully craft a timely disrobing of that ubiquitous spokesman for retailers and the corporate dollar machine, Jolly ol’ Saint Nick.

Any obvious holiday spirit or moral lesson in Rare Exports is buried nicely under the unadulterated vision of St. Nicolas and the Krampus of Alpine tradition and lore. Before the corporate makeover in the 19th century, the Krampus were St. Nick’s elves, and they did the more unpopular tasks assigned to Saint Nick these days. They were depicted in legend with long, pointed tongues, cloven hooves and the curled horns of a goat. And the business they carried out was a beating with a birch rod, a tight wrapping of extremities with chains and a one-way ticket to hell in a wicker basket for those that hadn’t lived up to the ‘standards’ that all little boys and girls should abide.

It’s in this land of the Krampus that Rare Exports takes place: the frozen north, the birthplace of the myth of Santa Claus, the Finnish countryside, a place where the children break into. Buried deep in the bowels of a mountain, ostensibly for his crimes rather than his benevolence, an archaeological team is working overtime to blast Saint Nick from the mountain in time to take advantage of his presence for the holidays. It’s a town of wicked little children who smoke and curse, and when they start to go missing, Pietarri (played with spark by Onni Tommila), the one good little boy in the whole town, soldiers up to save the town from certain doom at the hands of Saint Nick and the Krampus.

For a holiday that breeds cynicism and derision from even the most down to earth, Rare Exports: A Christmas Tale is that welcome film that allows you to exhale and have an ironic laugh amidst the mountain of shiny packaging and the non-stop patter of slick salesmanship. A simple, smart and direct telling of a holiday story that is visually arresting without the bludgeoning of Hollywood CGI and a darkly comedic holiday tale. It’s a safe bet that you won’t find a similarly engaging depiction of Santa Claus this season unless you give your out-of-work uncle $50 and a fifth of bourbon to entertain the kids in the neighborhood. Season’s greetings.