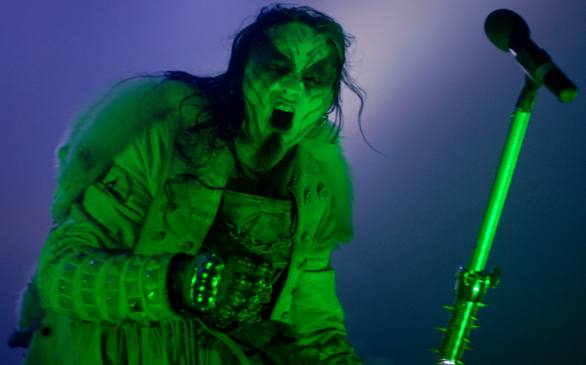 Symphonic black metal band Dimmu Borgir completely destroyed the Fox Theatre on their Darkness Reborn Tour. Dressed as if they walked out of the movie Hellraiser, the Norwegian group sent an eerie and haunting groan across the room. The intro music accompanied with fog machines and state-of-the-art light shows drove the crowd insane once they appeared.

Lead singer Shagrath roared into the microphone repeatedly as everyone mimicked his every word. Drummer Daray expressed his love for the double pedal bass drum by continuously kicking the life out of it. Half the time the beats sounded faster and louder than machine guns. Guitarists Silenoz and Galder shared countless face-offs, providing the heavy metal sound in each song. Keyboardist Brat was in charge of playing the band’s signature symphonic sound that could scare Frankenstein.

The setlist spanned across all albums, playing favorites like “Puritania” and “Indoctrination” to recently released songs “Dimmu Borgir” and “Born Treacherous.”

Dimmu Borgir is unlike other black metal bands. Their music is heavily driven by orchestral sounds and symphonic melodies. The concert was directly motivated by stage shows and theatrics. As a live group they provided much more than a musical performance. They captured the audience for roughly two hours and took them to thematic heights of epic proportions. The audience fed off the energy as many in the crowd surfed across the floor, raising devil horns in the air and jumping in circle pits of utter destruction.

They continue their 32-city North American tour throughout the fall while promoting their latest album, Abrahadabra. With nine studio albums and countless world tours, this group shows no signs of stopping. Dimmu Borgir is a must-see act for all the black metal fans. Expect a second tour in 2011.