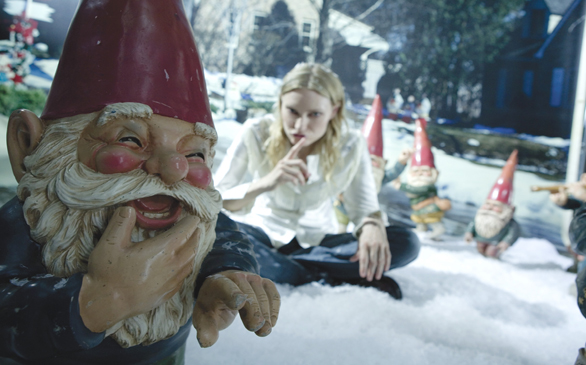 With an ironic nod to television Christmas shows of yore, Largo at the Coronet presents Aimee Mann’s Christmas Show Dec. 9 through 12. Chock full of an eclectic mix of comedians, fellow musicians and actors, this unique pageant most definitely has something for everyone.

This year’s lineup includes Zooey Deschanel, Patton Oswalt, Paul F. Tompkins, Ben Gibbard, Michael Penn and “Mad Men”’s Rich Sommer (He plays Harry Crane for those in the know.). Mann hints at further, unannounced guests to be determined (or persuaded) right up to the last moment.

Though Mann may not be the first artist who comes to mind for a holiday variety show, she has earned her stripes with four previous extravaganzas, as well as her 2006 Christmas album, One More Drifter in the Snow.

However, according to Mann, the idea for a Christmas concert of sorts was not her idea.

“It was something my manager suggested that at first I thought was ridiculous,” she says.

Not a big fan of the genre, Mann remembers, “[Variety shows] were always around so you absorbed them even if you didn’t want to. I found them a little dull – the sheer ridiculousness of it.”

The addition of comedians was what turned the tide for Mann.

“Because I had worked with comedians before, I started to think about it as more fun. I really admire comedians. They’re very fast on their feet. Their minds are always working – everything that happens is being translated in their minds into writing jokes – being creative around the clock.”

Mann’s alternative take on the usual festivities extends to her perception of Christmas as a whole.

Even though a variety show may not seem a natural fit for Mann, the truth is her career has seen more twists and turns than most singers. Starting out in a punk group called the Young Snakes, Mann later found success with the New Wave group ’Til Tuesday and has settled comfortably in singer-songwriter mode.

“Most young people try out one thing and then you’re done with it,” Mann says. “Punk had a great do-it-yourself vibe – it was very welcoming. If I hadn’t had that atmosphere I wouldn’t have had the courage to try stuff. Post-New Wave pop music was a reaction against that. I found punk constricting – like ‘I want to write a pop song!’ I eventually realized what I like to do is somewhere in the middle.”

Mann wonders if today’s musicians, with their early success, will have the room to grow that she did.

“I’m really fascinated to see someone like Taylor Swift with a full-blown career at 20. The business is so different. But maybe the advice is always the same – you have to love doing it and do it a lot. The more you do it the better you get. You practice anything and your brain starts to get certain things down.”

Another interesting facet in Mann’s evolution is her contribution to the Magnolia soundtrack. Unlike most collaborations between musicians and directors, where the songs get put in after the film is finished, Mann and director P.T. Anderson used each other to shape the story.

“It all came at the same time. We had a lot of conversations about the characters and themes. At some point it kind of mutated into that. He was listening to my music while he was writing,” Mann explains.

Frustrated by the recording industry, Mann branched out in 1999 and started her own label, SuperEgo Records.

“Being on a major label – it’s always the lunatics running the asylum situation. It’s very hard to get anything done.”

If all that isn’t enough, Mann is currently turning her latest album, The Forgotten Arm, into a musical.

“It’ll take a while. It’s a totally different skill – a whole different way of thinking.”

As for the singer’s favorite holiday tune?

“I like 'Chestnuts Roasting [on an Open Fire],' man. It’s a great stand-alone song.”

The Aimee Mann Christmas Show is Dec. 9, 10, 11 & 12 at Largo at the Coronet. For more information, visit aimeemann.com.