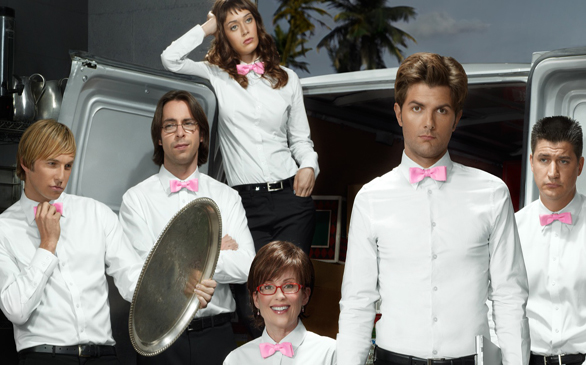 The day that television died for me was the day “Freaks and Geeks” was cancelled after only one season. I guess die is a harsh word, but I lost much of my faith in TV. It was a little bit like finding out there wasn’t a Santa Claus and then realizing that the Easter Bunny and Tooth Fairy were the cruel invention of the candy companies as well. Actually it was a lot like that.

“Freaks and Geeks” was written, directed and produced by the talented Judd Apatow from 1999 to 2000. As you know, Apatow went on to make several hits like The 40-Year-Old Virgin and Knocked Up. The commonality between all of his works is the cast and crew with whom he consistently works. “Freaks and Geeks” starred young Seth Rogen, Jason Segel and James Franco, all of whom had starring roles or at least small parts in Apatow’s later films.

The show is set in the 1970s, and the protagonists were not your average high schoolers. The freaks (mainly Franco, Segel and Rogen) led a much different life than the freshman geeks (Martin Starr and John Francis Daley). However, the two groups are brought together (kind of) by Linda Cardellini’s character who is caught between both. The show is a prime example of superb writing, directing, acting and everything else that goes into making an hourlong drama feel so quick.

Whether or not you watch television on a daily basis, there is something inspiring and exciting about finding a truly impressive show, one that may in fact replace your nightly movie, which definitely happened to me. You expect these types of things from networks like HBO and Showtime, but don’t ever assume that all of what they produce is something you will automatically connect with. I tried getting into “Hung” but to know avail. I enjoyed “Big Love,” but couldn’t keep up with its ambiguous subplots and identical-looking polygamist families. The moral of the story is choose wisely, but give everything a try.

The always-lovely people at the Cinefamily have obviously had a similar experience to my traumatic period of grief and mourning for the demise of “Freaks and Geeks.” They, however, are doing something to let the head honchos at the studios know how we feel. On Dec. 12, come support the cause at their “Party Down” Memorial Service & Cinefamily Fun-Draiser. It’s a long day – a full 12 hours from noon to midnight – but you will surely get the full “Party Down” experience.

What is “Party Down” you ask? Like “Freaks and Geeks” and “Arrested Development,” the short-lived but highly acclaimed shows of the last decade, “Party Down” only lasted two seasons and saw talent like “Glee”’s Jane Lynch, Adam Scott and Martin Starr.

It had its run on Starz, and although it can be characterized as another one of those funny sitcoms (think “The Office” or “30 Rock”), there was something surprisingly original about “Party Down.” Unlike the others, it didn’t seek to monopolize on overly quirky characters but instead told the story of aspiring actors working as caterers with wit and originality. None of the characters were annoying, and the plot moved steadily through, even if the writers, scared of the eventual cancellation, decided to throw in a pointless pregnancy and out-of-control plot that were the downfall of the show.

“Our fans, even though we didn’t have huge numbers, were exactly the type of people we were hoping to impress: smart, vocal, funny and almost snobby about their comedy preferences,” “Party Down” co-star Lizzy Caplan has said about the show. “I think if a girl who liked ‘Party Down’ found out that her boyfriend liked ‘Two and a Half Men,’ she would break up with him.”

The show’s co-creators John Enbom and Dan Etheridge will be there in person (schedules permitting) along with many of the other cast members. Most importantly, the event will be catered, so you can have a full-fledged drunk night watching a quality show with fellow admirers.