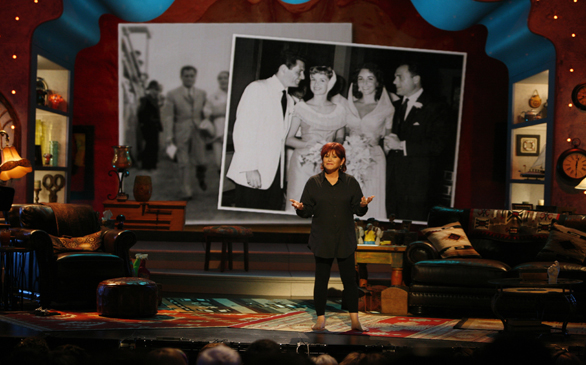 When most people think of screen icon Carrie Fisher, they probably immediately think Princess Leia. Most don’t think comedy. But Fisher’s television adaptation of her acclaimed one-woman stage show, “Wishful Drinking,” might just change that. In her own words, “If my life wasn’t funny, it would just be true, and that is completely unacceptable.”

Her life was by no means easy and never for a moment dull. Throughout the course of the show Fisher weaves tales of her Hollywood royalty family, her often-turbulent love life, her dual careers in film and print and even her struggles with drug addiction and bipolar disorder with remarkable candor and abundant wit.

Born to crooner Eddie Fisher and legendary actress Debbie Reynolds, Fisher maps marriage plot twists within her family line that almost seem too ridiculous to be true on her Hollywood Inbreeding 101 chart. Indeed her lengthy succession of stepparents and their offspring yields more branches than most people manage to chart in their entire family tree.

Stories of her own marriages are delivered with nary an ounce of bitterness. OK, maybe just a smidge, but for every jab there’s a good measure of understanding to balance. The HBO version of her live show is enhanced with archival film and photographs to enliven the stories.

Fisher also pokes fun at Star Wars merchandizing as she highlights examples of the often-obscene ways in which her likeness has been used for marketing products. She somehow manages to tie this in to her appearance in an Abnormal Psychology textbook (as an example of a famous person with bipolar disorder), “I’m a Pez dispenser and I’m in the Abnormal Psychology textbook! Who says you can’t have it all?”

Fisher is a captivating storyteller who will make you laugh from beginning to end. My sole complaint is that her show is over far too soon.

TV Time
(Almost) every show coming to TV this summer. And 29 that aren’t
314 views

TV Time
‘Every night at 7 o’clock I burst into tears’: TV mentor Tim Gunn is freaked out too
321 views