A-h-h-vocados: From Guacamole to Ice Cream, ‘Homely Fruit’ has a Multitude of Uses 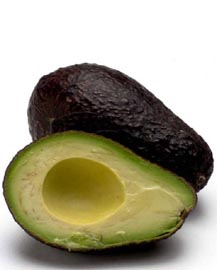 Avocados are proof that you can’t judge a fruit by its cover.

At peak ripeness, the most popular variety, known as the Californian or Mexican Hass avocado, turns dark and pebbly and wrinkly, sort of like a pear gone seriously wrong.

But cut one open and you’ll taste why avocados have entranced diners since emerging from Central America thousands of years ago.

Satiny, silky, sensuous, smooth – all the adjectives that avocado growers and promoters use for the homely fruit apply.

Indeed, avocados are sort of like a creamy dairy product that grows on trees. They contain a surprising amount of fat – about 15 grams per half – but fortunately almost all of that is the monounsaturated fat (the same kind found in olive oil) that is thought to be good for the heart. They’re also loaded with potassium, fiber and disease-fighting nutrients.

Unlike many fruits, avocados aren’t usually eaten out of hand. But their uses are many.

The best-known dish featuring avocados is guacamole, in which the pale green flesh is mashed with lime juice, tomatoes, onion and sometimes other ingredients and served as a dip for chips.

Good store-bought versions of guacamole are available. The advantage of making your own is deciding just how smooth or chunky you want it.

Mexican restaurants serve slices of avocado as part of a torta (sandwich) or simple garnish; they add color to the plate and help cool off the palate. A thinned-out version of guacamole often stands on tables to be squirted onto tacos and burritos.

California is the world’s biggest producer and consumer of avocados, and cooks there have built many more dishes around them, from soups and salads to smoothies and even ice cream.

Baked potatoes, bagels, pizza and just about anything that you might ordinarily top with sour cream, butter or cream cheese can be crowned with avocado instead – at a decided nutritional gain.

However you use an avocado, it’s important to know when the fruit is ripe because its taste otherwise is quite insipid.

If shopping for an avocado to use immediately, look for one that has turned almost black. It should also yield to pressure when gently squeezed. If squeezing it leaves a small dent, the avocado may be used for mashing instead of slices. If pressure leaves a large dent in the fruit, it is overripe and should not be used.

Firm avocados will ripen at room temperature in two or three days. Place them in a closed paper bag (with a tomato, if handy) to speed up the process. Never put an unripe avocado in the refrigerator. Ripe avocados can be kept refrigerated two to three days.

To open an avocado, cut it in half lengthwise around the inedible pit. Twist to separate the halves. Tap the pit with the blade of a sharp knife and pull it out. Peel off the skin, starting at the small end, or simply scoop out the flesh.

To keep cut avocados green, cover the surface with plastic wrap or rub with lemon juice.