Guy and Madeline on a Park Bench 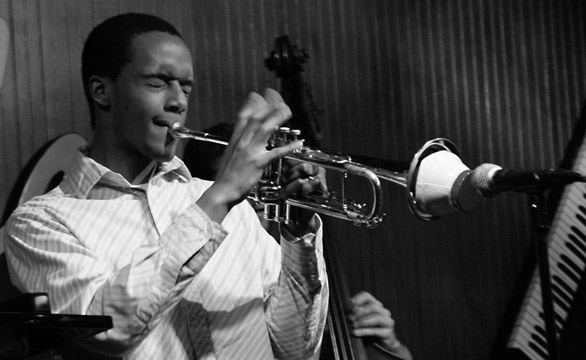 The key to a musical is not glitzy costumes and huge production numbers; it’s the buildup of emotion in a character that explodes into song. It makes the musical believable because the character is feeling so much, the only way to get it out is to sing about it. Guy and Madeline on a Park Bench, written and directed by Damien Chazelle, is a new-style musical, blending modern documentary-style filmmaking, jazz musicality and classical Hollywood song-and-dance numbers. The titular characters of the movie – Guy (Jason Palmer), a jazz trumpeter, and Madeline (Desiree Garcia), a quiet intellectual – are in a faded romance. Guy ends the relationship after meeting the outgoing Elena (Sandha Khin). The film follows Guy and Madeline in the aftermath of the break-up as they find their way back to each other.

As I mentioned before, the characters do burst into song (whether sung or played on trumpet, as in Guy’s case). The first moment of a breakout occurs in a party scene, just when the documentary style is beginning to wear on the viewer as the many conversations in the room swell up in an incomprehensible cacophony of voices. When a minor character starts to sing, it’s a relief. It’s also a fantastic number and a great way to introduce the pattern of musical numbers. Also, tap dancing occurs, a seemingly lost art form that is well appreciated.

The film is not only a love story between Guy and Madeline, it’s a love letter to jazz music. The rhythm of the film feels almost improvised, and every character that the viewer is meant to root for has a love for jazz. It’s a delight listening to Palmer, a real-life award-winning jazz trumpeter, jam with fellow musicians at the gigs Guy plays in the story. As Guy plays a beautiful ballad on his horn in the final scene, I couldn’t help feeling that the film ended too soon.


Guy and Madeline on a Park Bench is currently in select theaters.
Article posted on 12/13/2010
This article has been viewed 1539 times.