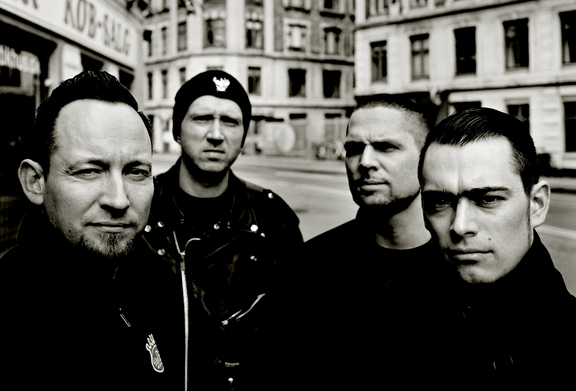 This Danish hard rock band has been scratching and thrashing their way to the upper echelons of the indie scene for almost a decade and in the process have achieved somewhat of a cult status on American soil. Beyond Hell/Above Heaven, their first release for a major label, is poised to push Volbeat to the next level, but the release will have to do without tour support for awhile as guitarist and lead singer Michael Poulsen is currently undergoing tests for an unnamed illness and the band is on hiatus until that situation is resolved.

In the meantime, Volbeat should pick up plenty of new fans with songs like “The Mirror and the Ripper,” a galloping fusion of melodic metal and psychobilly; the punky mash-up is the keystone of the Volbeat sound and is also featured on “A Better Believer,” “16 Dollars” and “Being 1.” The rockabilly derivative even flavors the all-out thrash of “Evelyn,” complete with throaty demon-style vocals from guest singer Mark “Barney” Greenway of Napalm Death.

One of Beyond Hell/Above Heaven’s best tracks also features guest players; Michael Denner of Mercyful Fate and Mike Petrozza of Kreator contribute to the eerie, western movie theme-like “7 Shots,” a “Ghost Riders in the Sky”-style tune where Volbeat get to live out every little boy’s (even Danish ones) fantasy of being a Wild West gunslinger. There’s nothing on this album that sounds like Metallica, but Poulsen tends to employ the same singing style as James Hetfield, often abruptly clipping off the ends of phrases while stringing others out with a Hetfield-like “aaauhh!” and the technique is especially noticeable on “A Warrior’s Call” and “Magic Zone.”

A constant throughout Beyond Hell/Above Heaven is that Volbeat seems to be having lots of fun, and fans new and old will most likely appreciate the pretense-free attitude that these rockers exude.


Beyond Hell/Above Heaven is currently available.
Article posted on 12/13/2010
This article has been viewed 1940 times.