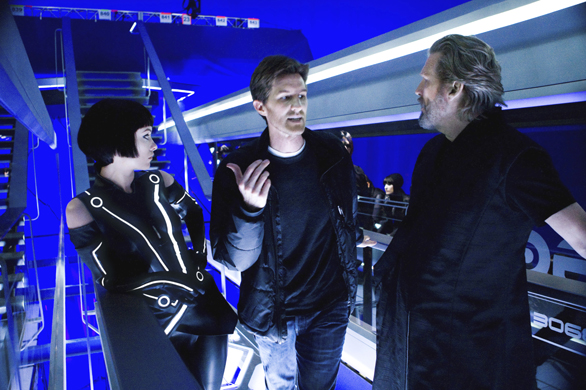 When was the last time you went into a movie with expectations? When you went in thinking that you were about to be on the ride of your life? You watched every trailer, heard every interview and now is the time to see this masterpiece.

Well, if you’re me that just happened when I screened Tron: Legacy.

Watching the movie, it’s easy to see that they took care to make everyone happy: the old fanboys who know its history inside out, the kids who were seeing a lightcycle for the first time and all the fans of The Big Lebowski who were hoping to see a little bit of “The Dude.” Usually when you create a movie like this and try to bring in such diverse elements as the aforementioned, it ends up being a train wreck. However, this movie seems to be something out of the ordinary.

“I wanted it to feel like we took motion picture cameras into the world of Tron,” director Joseph Kosinski starts to say. “I wanted the materials to be real materials: glass, concrete, steel, so it had this kind of visceral quality to it.”

And it works. The mix is seamless. The directing is amazing, but if it weren’t for production designer Darren Gilford and his way with light, we would all be sitting in the dark. The mix of color is perfectly set against a stark backdrop of black.

“The first film was so iconic and lots of that was because of the limitations of the computer, what they really could do back in the ’80s. It was very geometric, very simplistic. With what we have now, it’s limitless,” explains Kosinski.

Then there’s the 3-D. Thank God for 3-D. I’m not saying exactly when or what, but when it hits for the first time, when it really hits, you’re going to feel like you can fly. Never has there been this kind of attention to digital detail. It’s the first movie to integrate a fully digital head and body of an actor playing against the younger version of himself; to reate molded costumes using digital sculpture exclusively from molds directly from computer files using CNC (Computer Numerical Cutting) technology; to extensively use self-illuminated costumes; and it’s the first 3-D movie shot with 35mm lenses and full 35mm chip cameras.

Then, you get Jeff Bridges. “The Dude” and Starman. He plays himself twice, and it’s like two different guys. There’s no way this movie could have been made any earlier. The technology wasn’t good enough, and we didn’t have this awesome older version of Bridges.

“As an actor, it’s very gratifying to know that I can play myself or the character that I’m playing at any age, from an infant to an old man,” Bridges says.

The cast really sits in the smaller size of things but remains to have a big feel. The character Michael Sheen plays, Castor, fits so well it’s uncanny. And, of course, the cameo by Daft Punk is going to be one of the most-talked-about moments in the flick.

Which brings us to the sound of Tron: Legacy.

Daft Punk scored a soundtrack that not only pushes their sound to new levels, but acts as a character in the film itself. With over 100 minutes of music, the fans are sure to be thrilled, and the new ones will surely follow. The video for “Derezzed” that caught like wildfire online is the essential track for this musical offering.

Without a doubt, this movie will be what I’m giving as a gift for the holiday season, just so I can see it again. The story is Disney safe, but it’s more about the visual and audio onslaught of awesomeness that will have you counting the days until Halloween so you can throw on your LED-infused wetsuit.

Interviews
Lily James and Sebastian Stan find a real relationship at the heart of 'Pam & Tommy'
154 views
Interviews
Ricky Gervais knew people would be mad about his new Netflix special. He did it anyway
774 views

Interviews
The star of Oscar-nominated 'Flee' gives his first interview: 'I wanted my story to be seen'
1,150 views

Interviews
'Crazy Rich Asians' made Henry Golding a star. Now he's showing Hollywood everything he can do
841 views