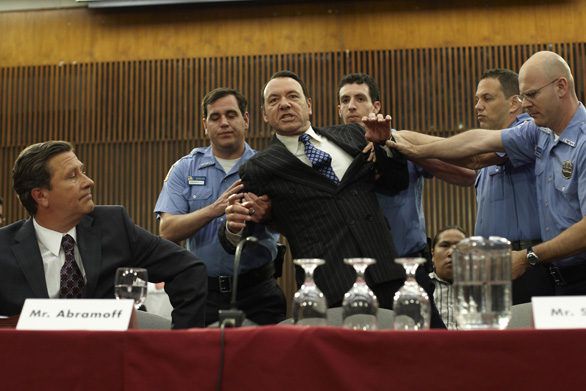 The one thing that Hollywood and Washington, D.C. have in common is their love of a great story. A political lobbyist named Jack Abramoff managed to piss off throngs of Washington’s elite when he and his friends defrauded a number of American-Indian tribes. Abramoff, a number of White House officials and other D.C. staffers were accused of trading meals, fancy gifts and even vacations in exchange for political favors.

In January 2006, Abramoff pled guilty to three felony counts for his fraudulent activities against the Chippewa, Coushatta, Agua Caliente and Choctaw tribes and their gaming interests. He and his colleagues would lobby against their own clients to drive up costs and even overbilled the tribes for services rendered. His tale of deception, greed and lies is told in the dark comedy, Casino Jack.

Academy Award-winning actor Kevin Spacey stars as Abramoff. Rounding out the film’s all-star cast is Kelly Preston (as Abramoff’s wife), Barry Pepper and “Saturday Night Live” alum Jon Lovitz, who plays a mob-affiliated friend of Abramoff’s. Spacey and Lovitz have maintained their friendship for over 20 years, and Spacey even does a spot-on impersonation of the comedian (who is sending critics into a delighted frenzy with his winning performance). Spacey, a dynamic star of stage and screen, may also be garnering additional Oscar buzz for his role as the fallen politico, but he admits to being somewhat oblivious to the scandal as it erupted.

“I sort of didn’t know anything about him really, because when the story broke, I was already living in London, and so I didn’t get the kind of news – it sort of didn’t mean anything in England.”

The actor had been busy with his theatrical partnership at the Old Vic in England. He was pleased to get the chance to meet with Abramoff to gain insight into his emotional state during his trial and conviction.

“In the interest of full disclosure, I [just] think he was deeply, deeply upset that George Clooney wasn’t playing him,” jokes Spacey.

He goes on to praise their first meeting: “It was a fascinating opportunity.”

Abramoff had a number of traits that Spacey found unique. Despite his brazen behavior among D.C.’s movers and shakers, Abramoff is an Orthodox Jew who hides his religion, literally under his cap.

“Actually the reality is that he always wore hats. He always wore a yarmulke [under hats] because he didn’t like to push his religion on other people.”

Spacey’s role was also steeped in irony, as he’s a staunch Democratic portraying a notorious conservative. At the time of his arrest, Abramoff was a top lobbyist for the Preston Gates & Ellis and Greenberg Traurig firms. He was also a director of the National Center for Public Policy Research, which is a well-known conservative think tank. In addition, he was also a College Republican National Committee National Chairman during the early to mid-1980s.

Even in the face of their differences, Spacey was still compelled by Abramoff. He surprisingly managed to find compassion in some of the more hostile treatment doled out to his on-screen counterpart during the course of the scandal.

“There were people he had known for years, who, when the scandal broke, all of a sudden couldn’t pronounce his name, calling him ‘Ah-brimoff,’” he explains.

In conjunction with his empathy for his subject, Spacey also found his working relationship with Casino Jack’s director George Hickenlooper to be especially enlightening. Hickenlooper died in his sleep in October 2010 at the age of 47. Casino Jack may have been his final film, but his presence has been felt in the weeks following his death.

“I really just loved George,” says Spacey. “He had this great laugh – it was actually more like a giggle. I absolutely adored him.”

Some of Hollywood’s talented up-and-comers (like Andrew Garfield, Justin Timberlake and Jesse Eisenberg) may soon hold Spacey in the same esteem. Aside from his theatrical pursuits, he also has a little gold statue in his sights for his role as executive producer of the blockbuster, The Social Network. However, until nominations are rolled out in early 2011, Spacey will return to his London home, satisfied with his performance and continuing to influence film and theatrical performers with his effortless style.