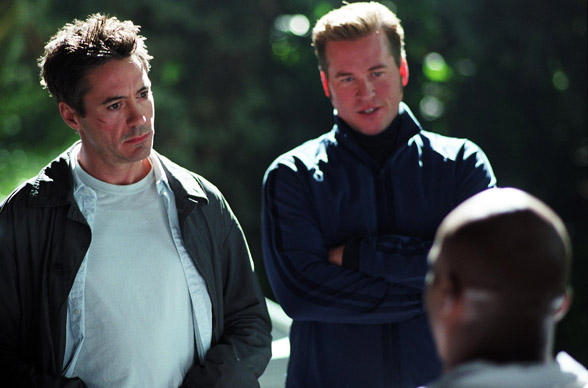 Robert Downey Jr. and Val Kilmer star in Kiss Kiss Bang Bang.
As mentioned a couple weeks ago, the proliferation of the holiday spirit is upon us once more. We are days, not weeks, from starting our calendar over. This is the best time of the year, when the anticipation nearly kills us with excitement, and the joy of giving is equivalent to the joy of shopping sales.

I’ve discussed for several weeks the fun screenings going on in our fair city. For me, the best kind of Christmas films are the ones that take the holiday season and find the mystery and morbidity that also comes with an overabundance of food, family drama and the need people feel to go over and above the joyful spirit of giving. There is definitely something funny about it and our sudden willingness to so freely act in the cheesy and corny ways people act around this time of year.

That juxtaposition between the sudden sincerity of people’s affections and the horrible acts of violence in horror films is what I live for. Gremlins (1984) was marketed as a kid’s film, but it’s a severely demented (and awesome) flick about creepy little creatures that ravaged a sleepy, snowy town trying to celebrate Christmas. Black Christmas (1974) is another stark and stylish horror film set during the holiday at an ill-fated sorority house.

However, possibly the most intense Christmas horror film is Christmas Evil (1980). It is the story about a boy who loves Christmas, but is scarred when he learns that Santa isn’t real. As an adult, he becomes obsessed with the behavior of children and the toys he develops for them. When his work is met with criticism, he snaps and goes on a bloody-good killing rampage.

You may not appreciate the horror film (or be able to stomach it) like I can, but there is an alternative. Co-presented by Comedy Death-Ray, the Cinefamily is hosting “Black Christmas Party” on Saturday, Dec. 18, at 7:30 p.m. featuring writer Shane Black (schedule permitting). If you’re sick of boring, cheerful films and famished for an action-thriller about the Christmas season, then you should get to know a little bit about Black, who is considered one of the pioneer screenwriters of the action genre. He made a name for himself with his Lethal Weapon (1987) screenplay and went on to write The Last Boy Scout (1991) and The Long Kiss Goodnight (1996).

“Christmas appeals to me because it’s promised magic,” Black has said about what draws him to the holiday. “But in L.A. it’s against the backdrop of something that’s very sterile and something not full of goodwill. There’s so little Christmas available, you sort of have to conjure it yourself. The magic is striving to break through. You have to really pay attention to find your Christmas, almost to earn it, which is what the characters have to do.”

The screening on Dec. 18 is a double feature: Kiss Kiss Bang Bang (2005) was Black’s directorial debut. Starring Robert Downey Jr. and Val Kilmer, the film is set during (shocker) Christmas in Hollywood where Harry Lockhart (Downey Jr.), a petty thief who auditions and gets a movie part, meets Gay Perry (Kilmer), a homosexual private eye. While researching for the role with Perry, Lockhart is thrust into the middle of a murder investigation, and he seeks to solve it.

The second film of the double feature is The Long Kiss Goodnight, which was written by Black and directed by Renny Harlin. Geena Davis stars as Samantha Caine, the perfect wife and PTA parent who also teaches at the local school. When she bumps her head, Caine begins to remember parts of her previous life as a lethal, top-secret agent. When her old co-workers target her as their next assassination, she hires a cheap detective (Samuel L. Jackson) to help her find the truth.

The Cinefamily’s invite reads: “Come to a kick-ass Christmas party celebrated in high Hollywood style – with eggnog, presents, decorations and awesome blockbuster action flicks.” Sounds like it should get us in the mood for the holidays quite nicely.

The Cinefamily is located at 611 N. Fairfax Ave., Los Angeles. For More information, visit cinefamily.org.
Article posted on 12/13/2010
This article has been viewed 1832 times.