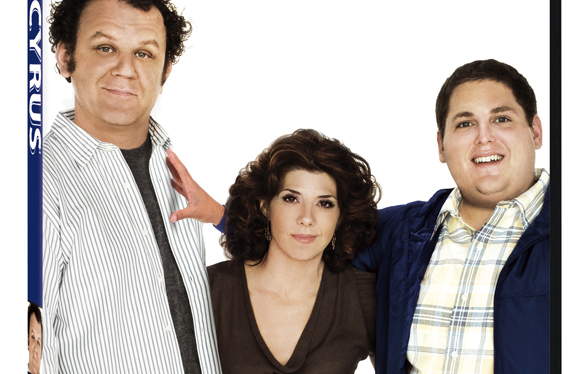 The Majors: John C. Reilly is a lonely divorcee who thinks he’s found the perfect woman (Marisa Tomei), until he meets her son (Jonah Hill) in Cyrus. Mumblecore auteurs the Duplass brothers go mainstream with this thoughtful and funny dramedy.

In Toon: Steve Carell is out to become the world’s greatest supervillain in Despicable Me. Only one thing stands in his way: the appearance of three ragamuffin orphans on his doorstep. Jason Segel, Russell Brand and Julie Andrews lend their voice talents to this fun-for-all-ages animated film.

A new hero dons the cape and cowl under the tutelage of an aged Bruce Wayne in Batman Beyond: The Complete Series. Included in the set are all 52 episodes, plus three new making-of featurettes. Kevin Conroy reprises his role from the excellent “Batman: The Animated Series,” while Will Friedle (“Boy Meets World”) is the new high-tech Dark Knight.

Master of animation Bill Plympton crafts a grotesque black comedy about a murdered high school couple that returns from the grave for prom in Hair High.

The Vault: Alan Rudolph’s noir homage Trouble in Mind comes to DVD in a 25th Anniversary Edition. Kris Kristofferson is an ex-con who falls for Georgia (Lori Singer), the wife of a small-time criminal (Keith Carradine) in Rain City.

Canadian auteur Guy Maddin has a style all his own. Using silent film techniques, Maddin crafts a singular blend of black humor and surrealism which is on display in The Quintessential Guy Maddin!, a collection of five films, including Careful, Twilight of the Ice Nymphs, Archangel, Dracula: Pages from a Virgin’s Diary and Cowards Bend the Knee.

Under the Radar: Guillermo del Toro (Pan’s Labyrinth) made his directorial debut with Cronos, an ingenious rethinking of the vampire mythos now available from the Criterion Collection. A 16th century alchemist designs a clockwork device designed to grant the user eternal life, however, the gift soon becomes an addiction. Like Pan’s Labyrinth, del Toro uses dark fantasy to tell a heartfelt story, in this case about the love between a grandfather and granddaughter.

Gasland investigates fracking, the controversial but little-known process for finding natural gas. At the center of the Sundance doc is yet another web of lies and corporate skullduggery from our old friend Halliburton.

Check out Shaq, Kobe and other basketball greats showing off and screwing up in NBA A-Z: The NBA’s Best Bloopers, Highlights and Hijinx.

The Idiotbox: “Frontline” and “American Experience” examine the role religion has played in shaping the American identity in the six-hour documentary series God in America. From the Puritans to Jerry Falwell, it’s a fascinating journey for believers and nonbelievers alike.

Sci-fi TV legend Gerry Anderson (“Thunderbirds”) brings his indelible style to Space Precinct: The Complete Series. Premiering in 1994, the series follows a former NYPD detective now in charge of keeping the peace among aliens and humans on the planet Altor.