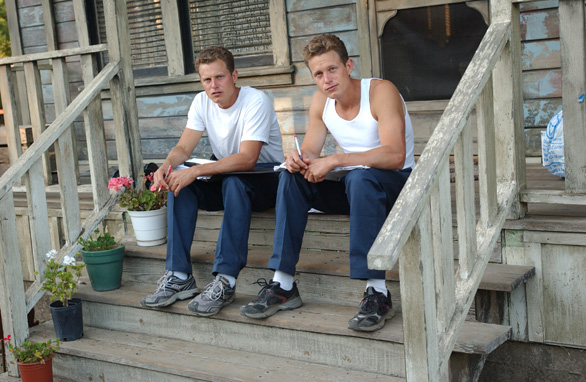 It’s difficult not to be slightly awed by Logan and Noah Miller. First, there’s their physical presence – a one-two punch of looming, squared-jawed, broad-shouldered manliness that makes their brief but loathed foray into modeling seem an obvious choice – and then there’s what they’ve accomplished, which is nothing short of miraculous.

Growing up, the identical twin brothers had their sights set on a career in major league baseball. But when that dream evaporated under the hot Arizona sun that beats down on minor league training camps, they found themselves blindly embarking on a film career. Without any experience, or even the knowledge that the written form of a film is called a “screenplay,” the Miller Brothers set off on a path that brings them to this week’s release of Touching Home, an independent feature they wrote, directed, produced and star in alongside four-time Oscar nominee Ed Harris.

To say these guys are ballsy is a serious understatement.

Touching Home is an unabashedly sincere and heartbreaking semi-autobiographical film about the Millers’ relationship with their father (played with breathtaking brilliance by Harris), a man who struggled with alcoholism, was homeless for the last 15 years of his life and died suddenly in prison. It was in the coroner’s office, holding their dead father’s hand, where the brothers swore they’d get the film made within a year, and through an astonishing series of events, they kept their word.

The Millers asked to meet at their de facto office, a Starbucks situated on a typically yuppie-flooded intersection of Santa Monica, so we could discuss their journey from working in a car wash in Tucson to assembling a cast and crew with 11 Oscars, 26 nominations and a budget seven times what they’d originally anticipated. Seemingly unremarkable, with cars, dogs and strollers whizzing by, this is the same place where the unflappable 33-year-olds convinced Ed Harris to star in their movie. Like I said, they’re ballsy.

As they sip green tea, I ask them to identify themselves so I can accurately attribute quotes later. Noah, the more assertive brother, begins.

“It doesn’t matter who said what,” he assures me. “So long as we say it or it’s flattering, it’s totally OK.”

“We don’t worry about that,” Logan, the seemingly kinder, gentler brother adds. And, as they continue talking, you realize why it won’t matter; rarely does a sentence started by one, go unfinished by the other brother.

Speaking in swirling tandem, they describe the dark days that brought them to Los Angeles for “an extended pit stop” on their way home to Northern California, their naïveté when they began the scripting process by reading a few screenwriting books – “We were complete idiots,” Noah laughs – to finishing their feature debut and landing a mega-agent whose rooster includes Michael Bay.

Asked how they had such an incredible string of good fortune, Noah says without hesitation, “Because we’d had such a string of bad fortune, it finally evened itself out. If there’s any justice, or whatever you believe in in the universe, you can only get so many no’s and eventually you’ll get a yes.”

“And, if you’re diligent, it becomes a constant game of leverage,” Logan adds. “Once you build that momentum, you just keep driving it.”

“And we always were prepared,” Noah interjects. “We were always going to make the movie, it just turned out we made it in the way we did.”

“We were going to make it on a video camera from Circuit City,” Logan says, without sarcasm.

“But it started growing,” Noah continues. “It’s easy to look at the end and say, ‘Oh, this is where we knew we were going to go,’ but each step opened a new door and we had to say, ‘OK, how do we build on this opportunity that we didn’t see?’ As events changed, our strategy changed.”

Asked if they had any strategy to get the film made, Logan answers rhetorically, “The strategy was to make the movie.”

On the other side of the filmmaking process, an ordeal they chronicled in their book, Either You’re In or You’re In the Way, the Millers are working on new writing projects, finalizing a book and a screenplay, but Logan admits life hasn’t changed much. “We’re in a similar position to before we made the movie,” Logan says, “but we’re in a better position because we have a little more credibility and the experience of having been through the entire process.”

“When you do it on your own and smash your face a million times, you learn so much,” Noah says.