Virtually Skunked?: Angling Game is Almost like the Reel Thing 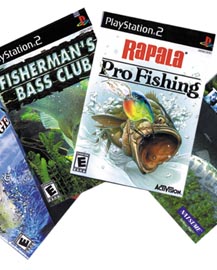 It’s a cool 61 degrees on the emerald waters of Lake Minnetonka, the "easy" level fishing hole for the novice angler in the "Rapala Pro Fishing" simulation on Sony PlayStation 2.

With a few hits of the left-hand controller button and a swift brush on the joystick, the tall, handsome, green-vested, blue-jeaned virtual me has gripped my 5-foot Rapala Sportsman’s rod and sent my chosen lure . . . nowhere.

"You almost took my head off with that one," shouted the virtual guide sitting in the motorboat and critiquing my clumsy technique.

Undeterred, I try again, this time casting the Finesse 6-pound line 34 feet out into the water near some lily pads and beneath a lush canopy.

My screen flashes to an underwater view of the lure I chose from a loaded tackle box of floaters and crankbait: Taildancer, a banana-shaped balsa, black, silver and pink-colored shad floater "guaranteed to attract gamefish."

Toggling the joystick between pressing the reel-in button, I bring the lure to life, moving it left and right atop the lake’s surface, all realistic motions that the Activision game developers in Eden Prairie, Minn., copied from watching the lure action in testing tanks.

Video and visits to lakes replicated the water’s clarity, the area’s scenery and fishing population so that this isn’t just a video game, but a true simulation.

With Taildancer dancing, I begin fishing (without a license, wearing my pajamas, sitting on the carpet in front of my television, in an Orange County home nowhere near Minnesota).

Within minutes, a chime sounds. The long narrow, body of a walleye circles my twitching lure, headbutts it and swims away.

I consider changing fisheries, starting over in another of the game’s vividly graphic 500,000 acres, such as Florida’s Lake Okeechobee, California’s Lake Castaic, Alaska’s Half-Moon, even the Amazon River and the murky swamp of the Danube Delta.

But I remain at Lake Minnetonka, and a half dozen errant casts, broken lines and near-catch experiences later, the blotchy head of a largemouth bass appears in the corner of the screen.

Its black marble of an eye catches the morning sunlight. Its fins leave tiny ripples in the murky water.

Then it pushes the lure, nibbles at it, pushes it some more, and, yes, opens its enormous cavern of a mouth and bites down, starting the real – and reel – panic.

"SET THE HOOK!" the guide yells. The message also flashes on the screen, prompting me to pull the joystick down to lift my rod.

What I hope to be my catch of the day tries to wriggle free. It yanks hard on the line, which makes the controller vibrate wildly and sets off a tension meter that is reading a dangerous red.

The guide tells me to follow the path of the fish – "Go left!" and "Go right!" he yells – to bring the tension back to a safe blue level, when I can begin to reel in the fish.

The fish tugs. It twists and turns, bucks out of the water, then flops below the surface to fight some more. Gauges on the bottom of the screen tell me how close the fish is to the boat: 12 feet, then 10, then 5 before the computer takes over.

The camera angle changes to above the surface. The virtual me kneels down, reaches over the side of the boat to grab hold of the fish, my first, my prize largemouth bass that fought me like a king salmon.

The virtual me raises the catch above my virtual head, and the screen gives me the vitals:

I could have sworn it was bigger than that. Anyway, it went into my live well for safekeeping. Perhaps I can mount it as a trophy on my virtual wall. Or maybe I’ll make it my virtual dinner.