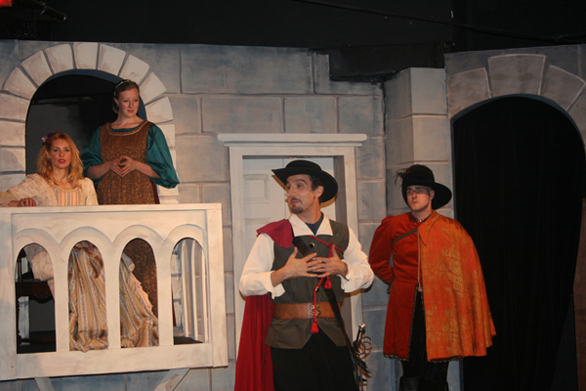 You won’t regret it. Don’t judge by the extremely cozy lobby you will wait in until the intimate house opens or even the program that notes there will be not one – but two – intermissions; the show’s cast for “Cyrano de Bergerac” is going to take you on an absolutely unforgettable journey.

The classic tale of “Cyrano de Bergerac” is delightfully played out at the Ruskin, impressive in every way. When you take your seat in the theater so tight that your feet are protruding onto the actors’ stage, you could never imagine that this miniature set could be filled with some of the greatest actors.

“Cyrano de Bergerac” tells the story of a man with an abnormally colossal nose. Because of his ugliness, everyone in town pokes fun at his appearance. Anthony Burgess’ translation of the play is nothing short of magnificent as the plot unfolds to show the townspeople of Cyrano’s day, and our audience today, that there is more than meets the eye.

Although his nose is large, his heart is much bigger. His lovable yet wounded personality is overpowering and so sincere. John Colella as Cyrano is ravishing in this role. He is so dearly dedicated to the script and the character that there is not one second you doubt his performance or his commitment to the role.

Colella holds the show together so brilliantly that the three hours of show time dwindle away without you checking your watch. Three hours is a lot to ask of anyone, but these actors deserve it. Everyone is well trained and has a beautiful story to share.

Olivia D’Abo (whom you might recognize from “The Wonder Years”) plays Roxanne, Cyrano’s biggest crush. She is mighty with a winning personality in this role.