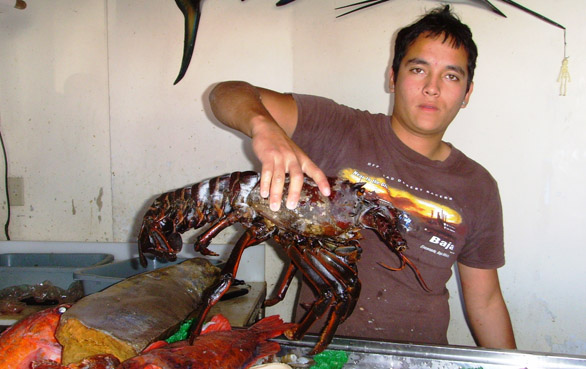 Stop for dinner at the famous “lobster village” of Puerto Nuevo.

Where’s the nearest place to go for a nice Mexican getaway? That would be Rosarito Beach, a seaside playground located in Baja, Calif., a mere half hour south of the border. For 85 years now, the place to stay when you get there is the Rosarito Beach Hotel.

Situated on a wide, clean beach, the Rosarito Beach Hotel offers everything you need for a fun beach holiday, plus a healthy dose of romantic history. A favored spot of movie stars during Hollywood’s golden era, Marilyn Monroe, Frank Sinatra, Robert Stack and Gregory Peck are just a few of the luminaries who’ve been guests at the hotel. More recently, Britney Spears escaped to the Rosarito Beach Hotel with her entourage and a gaggle of paparazzi in tow. You don’t have to be a celebrity to stay at the hotel, but by the time you leave you just might feel like one!

Fun at the Hotel: Most of the original rooms where the Hollywood stars stayed have been torn down and replaced by modern towers, but much of the Hollywood mystique remains. The portion of the hotel that houses its restaurants, front desk and spa are original colonial-style buildings decorated variously with fine imported tiles, Mexican art and Mayan art, and throughout these areas you can find wall plaques indicating where specific celebrities held court.

Take the hotel’s historic tour (usually daily, by request) and you’ll see all of these areas as well as the remaining beachside bungalows where the stars stayed. The bungalows are closed for remodeling now but eventually you’ll be able to stay in one of these historic apartments. The hotel also has a ghost, and you’ll see the stairway where she likes to appear.

History aside, the Rosarito Beach Hotel has a spa with a diverse menu, several pools including a rooftop infinity pool, a karaoke bar and lots more. Beach activities include horseback riding, ATV riding, relaxing under a palapa or taking a stroll on the hotel’s lengthy pier where you can have a cold drink or try your hand at fishing. Surfing and boogie boarding are popular here, too.

In the Vicinity: If it’s nightlife you crave, there’s plenty a short walk away. Five minutes up the beach is the largest nightclub on Mexico’s western shore, Papas & Beer (rosarito.papasandbeer.com). The club is famous for its French fries (papas is Spanish for potatoes), and the tradition is to have a fresh batch with your beer. But more so, Papas & Beer is known for its nightly dance party. Right next door are two other popular night spots; Iggy’s and the Corona Club.

If wine is your thing, take a daylong road trip to the Guadalupe Valley, the wine-making area of Baja where there are dozens of vineyards. Get a wine trail map at the hotel, then drive south toward Ensenada. On the way you’ll pass the arts and crafts shopping area called Popotla, the famous “lobster village” of Puerto Nuevo (stop for dinner!) and the seaside studios where Titanic and Master and Commander were filmed.

L.A. Cetto Winery (cettowines.com) is the Guadalupe Valley’s premiere winemaker – if you’re only going to hit a couple places make sure they’re one of them. Tours of their facility are available and the tasting room offers a wide variety of reasonably priced bottles to take home. Remember, though, you can only take two bottles per person across the border. Any more than that you’ll have to enjoy in the comfort of your room at the Rosarito Beach Hotel.