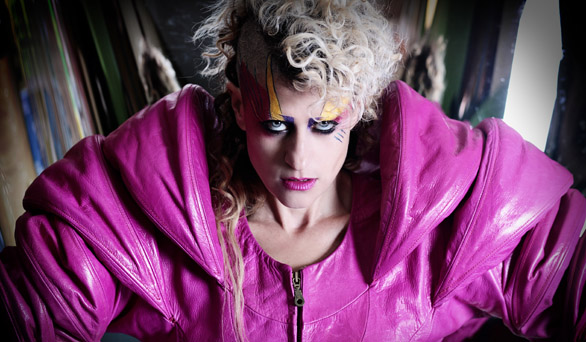 Electro-glam goddess Peaches – who isn’t afraid to flash her assets, ride a giant phallus on stage or rap about threesomes – has found religion. As an early Christmas present to her fans, the singer brings her critically acclaimed rendition of Andrew Lloyd Webber’s rock opera “Jesus Christ Superstar” to Los Angeles. It’s an unlikely match made in heaven, but for the pot-stirring Peaches, it was about time to make a childhood dream a reality. As Canadian-born Merrill Beth Nisker, she grew up singing the entire soundtrack of the musical alone in her room; as the Berlin-based provocateur, she’s now reliving her youth in front of hundreds.

“‘Jesus Christ Superstar’ is a musical where you don’t have to say a bunch of crap in between just to get to the next song,” explains Peaches. “I became obsessed with it. I would sing it all the time and always thought how cool it would be to do a one-woman show.”

The glittering spandex-wearing blonde’s wish came true when she was approached earlier this year by a theater in Berlin to start her own production. Peaches instantly knew that not only would she launch “Jesus Christ Superstar,” she would make it her own, just as she always intended. The result is “Peaches Christ Superstar,” where she takes on the Herculean task of playing every character, all while singing the entire soundtrack.

Peaches spent her teenage years preparing for her most ambitious career move to date, yet many wondered if the gender-bending star, often rumored to be a transvestite (she isn’t), was trying to take her explosive stage antics to new heights. Like Madonna during her Like a Prayer era, was Peaches trying to lure audiences with sex and religion? She giggles like a Catholic schoolgirl hearing a naughty secret just at the thought.

“As ridiculous as it is, I think it’s actually great to demystify and realize that we’re all the Romans, we’re all the Jews, we’re all Jesus, we’re all Judas, we’re all traitors, we’re all religious sometimes, we’re all whores, we’re all faggy kings,” she states while laughing. “I can see all the characters as me, as one person. People are like, ‘Oh, you’re relating to Jesus now.’ No, I just think it’s a cool story, and I don’t really have a particular religious affiliation with it. It’s a situation that happens over and over again. You know, a person has good intentions and ideas, but people’s fears get in the way.”

Peaches may have just wanted to live out her fantasies, but her European debut was quickly faced with the hellish backlash of critics. A month before the premiere, German rights holders denied permission to the singer due to her “unconventional production.” In response, she took to her Twitter and informed fans about the cancellation. The gospel according to Peaches spread like wildfire among the media, resulting in permission to ultimately be granted for the one-woman show. She insists that she wasn’t doing “Peaches Christ Superstar” for the money, yet the performances became an overwhelming success, especially when original “Jesus Christ Superstar” writer Sir Tim Rice, who always advocated for Peaches’ production, traveled to Berlin just to see her in action.

“It was fantastic!” gushes Peaches. “I was scared out of my mind and crapping in my pants before I went on. I think for him to bother to travel to another country just to see a performance done by an independent theater was really outrageous on his part. And then he actually liked it. We had quite the friendly interaction, which I find really validating, even though that wasn’t the point of why I did it.”

While audiences won’t find electrifying capes, flying mics or vision-piercing laser beams in “Peaches Christ Superstar,” they can expect the determined singer to belt out every single note with Chilly Gonzalez on piano. Whether she reenacts Judas with soul, Jesus if he were fronting Iron Maiden or the more vulnerable Mary Magdalene as the only actual woman in the production, Peaches proves to the world that she’s more than just a star who gets off at raising eyebrows. Rather, she is, and always will be, an artist. And if that’s not enough to convince curious critics, then they’ll have to wait for 2011 to discover some of Peaches’ upcoming projects that are just too juicy to reveal just yet.

“This was my busiest year,” says Peaches. “I just finished coming back from Korea doing an art installation where I took all the things that people threw on stage at me and made a cave out of it. Things are going in many directions right now. It’s much more than music. It’s about surviving creatively.”