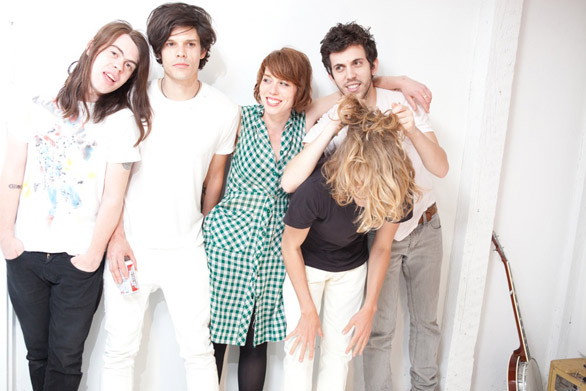 Talk about a recovery! Nominations are in for the 53rd Annual Grammy Awards, and Detroit rapper Eminem leads the pack with 10 noms, including a chance to take home the Album of the Year and Best Rap Album awards for Recovery. Em is also up for Song of the Year, Best Rap Song and Best Rap/Sung Collaboration for “Love the Way You Lie,” his duet with Rihanna.

Other potential big winners this year include Bruno Mars, up for seven awards, Lady Antebellum with six nominations, Drake and Katy Perry with four nods each and Muse with three. Ozzy Osbourne is nominated for Best Hard Rock Performance, Slayer and Lamb of God are among those duking it out for Best Metal Performance, while acts like the Band Perry hope to take home their first-ever trophy.

An interesting situation may test network censors this time around as Cee Lo Green’s hit “Fuck You” is up for multiple awards, something that is no doubt giving executives at CBS fits at this very moment. CBS airs the GRAMMY Awards show live from the Staples Center Feb. 13. For a complete list of nominees, visit GRAMMY.com.

JanSport Battle of the Bands

They started with over 800 entries but the list of semifinalists in the JanSport Battle of the Bands has been narrowed down to 50, and the company is now asking for fans to vote online to help choose 10 finalists. The grand-prize winner gets to play at the SonicBids Official SXSW party in Austin in March; they’ll also have travel expenses to Texas covered and win a JanSport luggage set.

Fans meanwhile can cast a vote once a day until Dec. 20 at jansport.com/battleofthebands. Nine California-based bands are in the running, and the Bay Area’s Dangermaker and Buckeye Knoll are among the contest’s top 10 vote-getters. If you’d like to help a Los Angeles band catch up, log in and vote for City City, Research Material, Acidic, Grand Vanity or Cannoneers of the New Command.

Are you familiar yet with Room 205? It’s a former rehearsal space in downtown Los Angeles that has been converted into a full audio recording studio where local and nationally known bands stop by to play three songs and sit for a casual interview, all of which is later streamed at goincase.com/room205.

So far performances by Abe Vigoda and Crystal Antlers have been featured on the site, and music from L.A.-based glam rockers Puro Instinct has just gone up. Two songs from Puro Instinct, including their single “Silky Eyes,” can be seen and heard now, and their third tune goes up this Monday, Dec. 20. Catch Puro Instinct live the following day at the D.I.Y. Gallery in Echo Park.

How About Some Grouplove?

Maybe you’ve already been getting your Grouplove – they were the opening band on the recent Florence + the Machine tour that played the Wiltern for three nights. Or maybe you’ve just been craving some Grouplove after reading about the joys of the band in NME and Nylon magazine.

“We never could have dreamed this up,” says Zucconi. “But at the same time we’re not at all surprised; Grouplove is meant to be. Our story is a testament to fate, and our music is something we are ready to share.”

Grouplove will be sharing their self-titled debut EP come Jan. 25, and they’re also scheduled for a Monday night residency at the Bootleg Theater beginning Jan. 3.

And speaking of Florence + the Machine, the band’s recent performance on KCRW’s Morning Becomes Eclectic program is now available on 10-inch vinyl. Find the seven-track collector’s item at amazon.com.