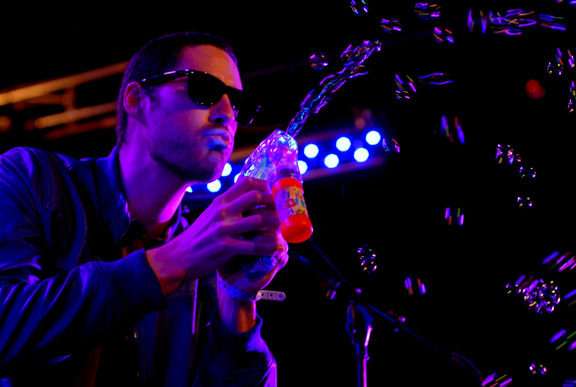 Los Angeles based electro pop group Capital Cities headlined the Troubadour and instantly capturing new fans across the floor. As they took the stage, the audience immediately responded with cheers and anticipation.

Lead singer Ryan Merchant quickly established the musical direction of the night as he blew bubbles into the crowd near the front of the stage. As the crowd burst the bubbles floating in the room, the message of dancing, fun and games filled the air. The group’s other core member, Sebu Simonian, hovered behind a keyboard while delivering vocals. Simonian controlled the audience with addictive dance beats and tempos that caused strangers to dance with each other. Completing the three-piece act was guitarist Nick Merwin who swayed back and forth dancing along his instrument. The trio showcased their abilities to entertain a packed audience well, as they interacted and involved everyone in their performance.

Merchant’s vocals seemed embedded with frequencies that quickly stuck in your head. Everyone sang along throughout the night regardless if they were first-time listeners. Songs like “Sold My Bed” are a perfect example. Simonian continued the feel-good tempo by providing ridiculously large neon glasses to the audience. As most of the front audience wore colorful neon shades, Capital Cities played their track “Safe and Sound,” receiving the biggest crowd reaction of the night. Arms flew back and forth in the air as others hopped on the dance floor.

Capital Cities’ music proved to be extremely catchy as many continued to sing after the songs were over. The 45-minute setlist begged for more. With a full-length album in the works, expect Capital Cities to invade the radio airwaves in 2011.