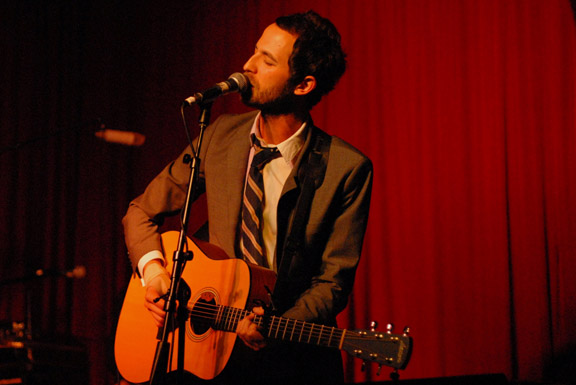 Promoting their latest EP release titled Akustiks, indie rock trio Eastern Conference Champions presented an amazing show for the crowd. Releasing a record at Hotel Café proved to be successful as the band interacted with the crowd without hesitation.

Kicking off the night with an acoustic guitar was lead singer Joshua Ostrander. The tempo quickly was set as a series of mellow songs filled the air. His voice was soothing for the crowd as they gently swayed back and forth. Guitarist Melissa Dougherty carried herself with confidence throughout the night while showcasing her talents as a musician. Greg Lyons completed the lineup as he sat behind the drums. Lyons set the perfect vibe for the night as he alternated from soft cymbal beats to faster drumming rhythms.

Because the venue was small and intimate, the crowd became just as much of the act as the songs were. Ostrander shined light on his comical side while reading a series of feats the band had accomplished throughout the year. From quitting smoking to the Twilight soundtrack, which is nominated for a Grammy, they thanked the audience for their amazing support and love as they continued the setlist. Ostrander wore multiple hats on stage while switching from harmonicas to a baby grand piano. The chemistry all of the members shared was perfect. They complimented each other musically and delivered stellar songs one after another.

“Don’t Think Twice, It’s All Right” was an instant crowd pleaser. The harmonica followed pleasantly with Dougherty’s guitar. Across the room many sang along softly and followed the beat with their feet. “Common Sense” was more aggressive but still well accepted. Eastern Conference Champions final 2010 show was a success as the crowd’s ovation proved.