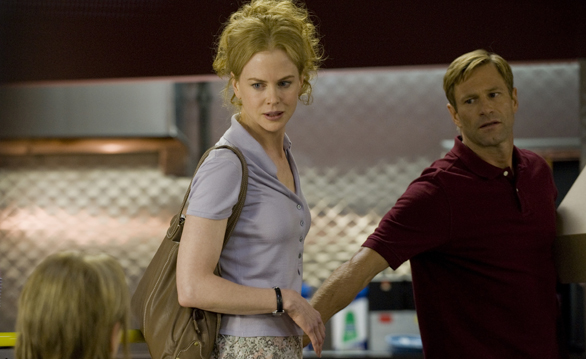 Directed by John Cameron Mitchell (Hedwig and the Angry Inch) and starring Nicole Kidman and Aaron Eckhart as a couple dealing with the death of their 4-year-old son, Rabbit Hole is a stripped-down drama bursting with emotion that works because of its simple direction and raw performances by its two stars.

Rabbit Hole is based on screenwriter David Lindsay-Abaire’s Pulitzer Prize-winning play of the same name, which is set in a seemingly well-to-do part of upstate New York. The film opens with Becca (Kidman) tending to her sprawling backyard garden, pulling fertilizer out of a bag and spreading it amongst a row of flowers. Her chirpy neighbor comes through the back gate and invites Becca and her husband, Howie (Eckhart), to a dinner party later that evening; an invitation, we can tell, that has been extended many times before. Becca politely turns it down, stating that she and Howie have plans; an answer that we can infer is not actually the truth. It is during this short time – the first five minutes of the film – that the tone of Rabbit Hole is firmly established: We, as an audience, can actually feel one of the many emotions being conveyed on screen.

Paired with Lindsay-Abaire’s poignant story and Mitchell’s effortless direction, the fact that we can actually latch onto each emotion felt by Becca and Howie is perhaps one of the film’s strongest elements. There is no grizzly scene depicting the death of their son (who we learn was hit by a car in front of their house), and no flashbacks, either. Instead, we settle into this couple’s grief rather efficiently, seeing everything that they see: their son’s artwork on the fridge, a homemade iPhone video and the toys and games in his unoccupied bedroom.

Not everything is super grim, though, thanks to a handful of supporting characters: Dianne Wiest as Becca’s mom and Tammy Blanchard as her sister are good at trying to lighten Becca’s mood and help her deal with her situation. There is also Sandra Oh’s Gaby, one of the women in Becca and Howie’s group counseling session who eventually helps Howie find some of the comfort and solace he is seeking. When all is said and done, though, the supporting players don’t take away from Kidman's and Eckhart’s raw – and at times uncomfortable – performances. These two are the reason that Rabbit Hole really resonates; and why we, the audience, are able to identify with the story as well as we do.