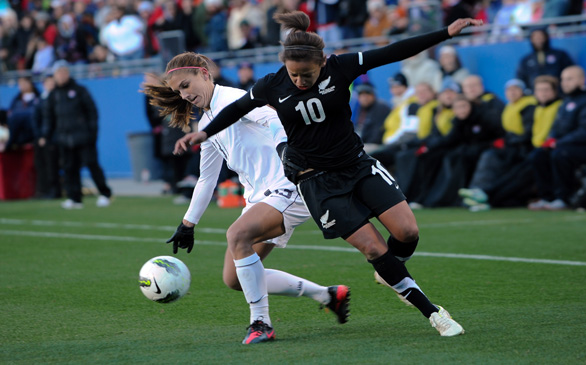 The Lakers are back on the right track after a flourishing road trip that saw them win six-of-seven games, including a Dec. 19 120-110 victory over the Raptors in Toronto. Six different Laker players scored in double figures, led by Kobe Bryant’s 20 points and 19 from Pau Gasol. In his third game since returning from injury, center Andrew Bynum collected a solid 16 points, seven rebounds and one blocked shot.

“I’m very pleased with the bench and how they performed in both the second and third quarters,” head coach Phil Jackson tells reporters after the Lakers’ fifth consecutive win. “I thought they bailed out the starters in a significant amount of minutes.”

Bynum played almost 18 minutes, the longest he has been on the court in one game since his return.

“I kind of felt it in the fourth quarter when I did a double jump,” Bynum points out of his playing progress in coming back from a knee injury. “I missed a layup and got back up on the rebound. It’ll be all right, there’s no swelling. I’ll just ice it all the way home; it should be good.”

Los Angeles’ bench has been hot of late, turning on their engines at the appropriate segments of game time. Three of the reserves recorded double figures, and Luke Walton nearly made that total run to four against the Raptors.

“They’ve been solid this entire trip,” Bryant says of the bench. “They came in and gave us a big boost.”

The Lakers’ (21-7) fifth straight win came before the long road trip came to an end, which featured their only loss in Chicago against the Bulls (88-84) on Dec. 10. They sit atop of the Pacific Division and in third place in the Western Conference standings.

The Lakers are scheduled to entertain LeBron James, Dwyane Wade, Chris Bosh and the Miami Heat on Christmas Day at 2 p.m. at Staples Center.