Another Year: One couple spends 365 days with the friend from hell. 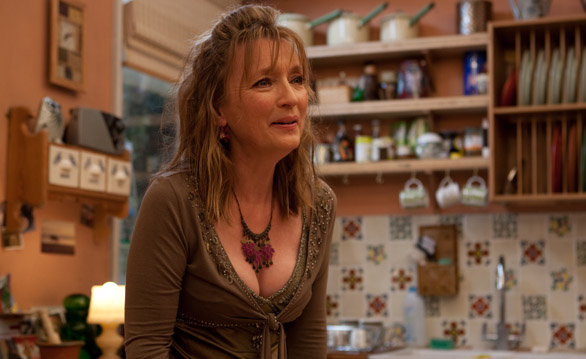 Lesley Manville as Mary in Another Year
(Credit: Simon Mein)

A middle-aged couple – Tom and Gerri (Jim Broadbent; Ruth Sheen) – live an idyllic existence in England. They’ve raised their son Joe (Oliver Maltman) and have both fared well in their respective careers (He is a geologist, she is a counselor.). The only hiccup in their lives is family friend, Mary (Lesley Manville).

She’s a train wreck: Although in her 40s, Mary has never had a husband, is childless, loves her booze and brings with her a new fiasco during each visit. Tom and Gerri look after her and offer emotional support when they can. However, Mary’s issues become too much for the couple to bear when she oversteps boundaries by making a play for Joe – who is years her junior. Later, during a family visit, Mary rudely addresses Joe’s new girlfriend (Karina Fernandez), further fueling tensions with her friends.

Another Year was directed by Mike Leigh. His modus operandi is to shoot films without a linear script. Instead, Leigh’s actors craft their own dialogue with a firm outline in place for each scene. For the cast, his style is one that has inspired them to keep re-teaming with the famed filmmaker (Broadbent, Sheen and Manville have appeared in a number of Leigh’s other works.).

Another Year is the perfect combination of wit and humor within the sad tale of the Old Maid. Manville has received much praise for her role of Mary, but was shockingly overlooked by the Foreign Press during Golden Globe nominations. Hers is one of the more audacious performances in 2010. Still, Manville is proud of the comedy and maintains her humor about the tragic character she brings to life.

“Well, everybody’s got a Mary in their life, haven’t they?” she jokes.