True Grit: What One Girl Will Do to Snag a Cowboy 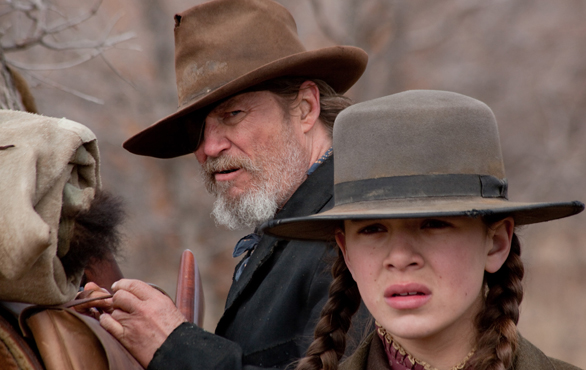 In cinema, there have been some truly historical young girls. Tatum O’Neal won an Academy Award for Paper Moon when she was just 10 years old. Anna Paquin won the Oscar for The Piano at the tender age of 11. Now, another young girl has taken Hollywood by storm, begging the question: Will the Academy of Motion Picture Arts and Sciences make it a hat trick?

Actress Hailee Steinfeld plays Mattie. This determined young woman sees her beloved father murdered by a bandit named Tom Chaney (Josh Brolin) and seeks revenge by hiring a drunken, curmudgeonly U.S. Marshal (Jeff Bridges) to bring the killer to justice. Why him of all people? Well, Mattie is looking for a man – as she puts it – with “true grit.”

Steinfeld in this role isn’t just brilliant for a teenager (She was a mere 13 years old during production and celebrated her 14th birthday just weeks before True Grit’s release.), but she flawlessly holds her own against two Oscar winners and a slew of other legendary talents.

The Coen brothers, who bring their dynamic sense of quirk and violence to the big screen, launched an exhaustive nationwide search to find a young woman who could breathe life into Mattie. She would need to have the girth to play a 13-going-on-30 child. She would also need equestrian experience. However, they needn’t look any further than right in their own backyards; Steinfeld was discovered in Southern California. She even did her own stunts.

“The horseback riding was fun. I used to ride English a few years ago,” she admits.

True Grit is action packed and filled with a surprising number of comedic moments. The humor is so strong that it has some wondering if the movie is a drama or in fact, a dark comedy. However, as the name indicates, it’s a story about tough guys. In order to assimilate, Steinfeld would need to thoroughly learn to assimilate into the character’s world.

“I had to learn how to shoot a gun and roll a cigarette,” she says. “Those are the two main things I had to learn.”

She also had to perfect her accent. Mattie is a young woman from the Deep South during the late 1800s. Not only would Steinfeld need to learn the cadence of her character’s speech, she would have to assimilate into that particular time frame, leaving her inner California girl behind.

“When I first got the script, that was the first thing I really had to work on,” she admits.

That layer of authenticity was something that the Coen brothers demanded from the start. Unlike the 1969 version of True Grit (starring macho man John Wayne), this film would be more heavily based on the book of the same name written by Charles Portis. The directors also focused on a specific tone for the film. Joel Coen calls it “young adult-adventure fiction.”

This lightness of spirit was not lost on the cast, Steinfeld in particular. Bonding with her co-stars came naturally. She and Brolin were at ease with each other within moments of becoming acquainted.

“Fifteen minutes after I met [him], [he] was on top of me with a knife to my neck, so that was interesting,” says the teen.

As for Bridges who steps into the classic role of Rooster Cogburn, he feels that Mattie’s quest is one that we all face at some point in our lives.

“True grit, as I see it, is seeing one thing through to the end,” he says.

Will Bridges and his co-stars see True Grit through to the end (as a possible film franchise)? Well, anything is possible. There are already talks of a sequel to the film entitled Rooster Cogburn. The original version of that film is also deeply cherished and widely renowned as one of the better westerns ever filmed. But until these accolades can find their way back to Bridges and Matt Damon, Steinfeld will be content to enjoy her sure and sudden rise to the top. After all, it’s not every day that a Cinderella story finds its way into the Wild, Wild West.

Interviews
The star of Oscar-nominated 'Flee' gives his first interview: 'I wanted my story to be seen'
1,024 views

Interviews
'Crazy Rich Asians' made Henry Golding a star. Now he's showing Hollywood everything he can do
733 views