(The Weinstein Co.)
By Ebony March 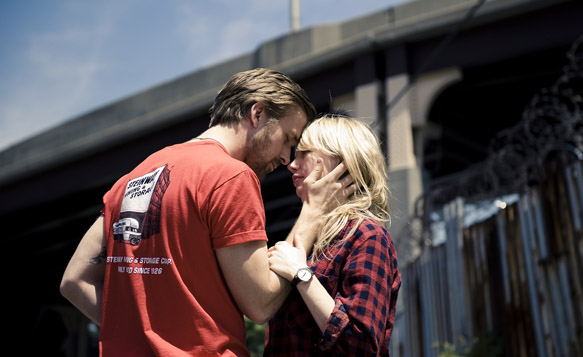 There has been a dazzling display of moviemaking this year. However, the real magic of cinema is displayed in Blue Valentine.

The drama was, at one time, marred in controversy with the MPAA. However, its initial NC-17 rating was appealed and ultimately downgraded to a consumer-friendly R-rating, allowing Blue Valentine to ease its way into theaters everywhere. Now, for moviegoers expecting the usual suspects associated with an NC-17 (i.e. full-frontal nudity or graphic violence), it won’t happen here. Instead, this intimate gem unfolds delivering an intense and heartbreaking portrait of a contemporary marriage.

The story centers around Dean (Ryan Gosling) and Cindy (Michelle Williams). The two meet by chance when his moving company completes a job at the same retirement home where her grandmother is a resident. Dean is an impractical but loyal dreamer; Cindy is a pragmatist looking for someone on whom she can depend. She has just broken up with her boyfriend and is anything but interested in Dean. However, circumstances link the two together. Through flashbacks, the couple’s nearly decade-long relationship as well as its undoing are examined until the inevitable moment when Dean and Cindy push each other to the brink during the film’s fiery climax.

Like modern architecture, Blue Valentine is simple and timeless in its elegance and impact. Derek Cianfrance’s storytelling is raw and undeniably cool, but always maintains a touch of poetry: As if it were a gift, Dean delivers a jaw-dropping revelation about men and women and the respective roles we play in relationships. This truth becomes the very foundation on which the story is built. Gosling and Williams play off each other’s power in a manner that is reminiscent of screen legends Gena Rowlands and John Cassavetes. Their subtle nuances make them look and sound like an actual couple every step of the way. I sat, riveted and mesmerized through each and every frame of this movie. Despite perceptions, there is nothing kinky or disturbing about Blue Valentine. I’m not exactly sure which scene in the film earned it an NC-17 rating in the first place. Sure, it’s brave, but it doesn’t have a gratuitous bone in its body.

Every actor and director hopes for that defining moment in his or her career when they breakthrough to superstar status. In Blue Valentine, Derek Cianfrance, Ryan Gosling and Michelle Williams have done just that.