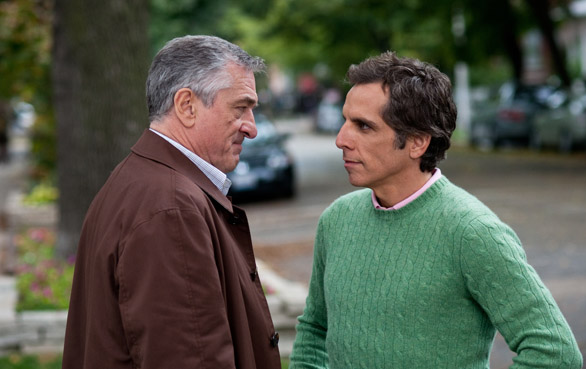 Greg and Pam (Teri Polo) are now the parents of 5-year-old twins. Greg is also the head of nursing for a swanky Chicago medical center. His job partners him with a pharmaceutical rep named Andi Garcia (Jessica Alba). She’s way hot and super fun, with the type of bubbly personality that suggests she’s probably been sampling a lot of the stuff she pushes. Greg attempts to downplay Andi’s hotness to his wife and father-in-law. However, when Pam’s sister separates from her cheating husband, this sends Jack into a tailspin. He becomes obsessed with the notion that Greg is cheating on his daughter. Jack also becomes obsessed with the idea that his grandkids are a little too much like Greg. Oh, and did I mention Jack becomes obsessed with getting Pam to leave Greg? Let’s face it: Jack has a whole mess of issues.

I really want to say that the third film of the series is as funny as the first two, but it’s missing some of the same chemistry of its predecessors. Meet the Parents was great, because it was about a fish out of water. Meet the Fockers was great because it escalated that theme, putting the Jack character in Greg’s shoes. But there’s not an odd man out in this film. I hate to say it, but “Oops! There goes the formula.”

Little Fockers isn’t totally disappointing; it’s simply beating a dead horse. None of the characters are delivering any new arcs to their personalities. And the kids, while cute, aren’t even the central theme of the film. They just seem like an adorable excuse for a third turn at bat.

However, there’s not a doubt that anybody going to see Little Fockers isn’t expecting a little predictability. So, keeping that in mind, check this one out with the family. It’s one of the few non-animated films for mom, dad and the kids. You’ll laugh a bit, and you’ll get to see Jessica Alba in her bra and panties. For many, that’s totally worth the price of admission, no?