TCU’s Road To The Rose Bowl 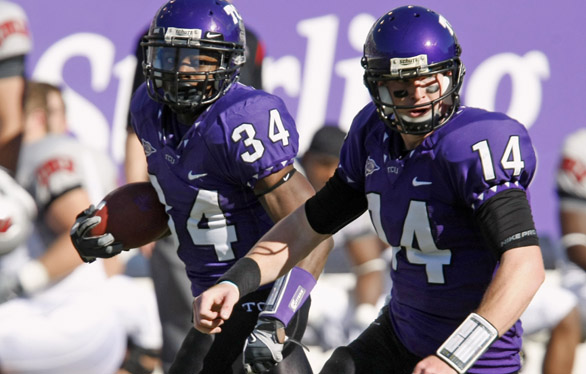 Texas Christian University, which belongs to the Mountain West Conference, began its season on Sept. 4 with an exciting 30-21 home victory against the then 24th-ranked Oregon State. OSU is a squad that just missed going to the Rose Bowl last season. Little did the Horned Frogs know that they would receive this year’s bid.

“We just beat a 24th-ranked team that I think should be ranked higher,” TCU’s head coach Gary Patterson told reporters after that game. “A game like this, it didn’t have to be style points.”

But style points are what TCU earned in each of their games throughout the year. Following the win over OSU, TCU pummeled Tennessee Tech by a score of 62-7 on Sept. 11 before ripping Baylor 45-10 on Sept. 18.

Then, the much-awaited matchup came: the Utes versus the Horned Frogs. Two undefeated teams ranked in the Top 10 of all college football. In reality, the best team won that game after third-ranked TCU outlasted Utah 47-7 on the road. That was the difference maker for TCU this season. That win showed that they could play against anybody, especially after winning on the road in such a convincing fashion.

And Utah truly did get involved in a catastrophe in terms of losing that contest. They did not stand a chance. TCU simply held too much talent and poise to succumb to its first season defeat.

“We showed we can play with anybody,” TCU quarterback Andy Dalton assured afterwards. The Horned Frogs remained composed and finished the season with two additional wins, one against the San Diego State Aztecs at home by the score of 40-35 and the season finale on the road at New Mexico 66-17.

San Diego State provided quite the danger and scare for TCU on Nov. 13. Most people thought it would be a blowout, but it resulted in being an exciting, close affair in the end. “I would say we found a way to win in a conference game. We played a big game, and we didn’t play as well as we needed to the next week,” Patterson said to reporters at that time. “It’s not the final score we would have liked to have had, but the bottom line, it falls under my category of [to win] by one point.”

But it really did not matter because in the end the Horned Frogs finished their season undefeated both overall and in conference play (12-0, 8-0), which has become good enough for a date against the Wisconsin Badgers in the upcoming Rose Bowl in Pasadena.

Arguably, the TCU Horned Frogs strength is their offense since they have scored and recorded many points in individual games. And no offense can succeed without a true quarterback.

Dalton, a senior quarterback, has been the heart and soul, the manager and leader of the Horned Frog offense this season. Overall, Dalton has registered 2,638 passing yards and 26 touchdowns in 194-of-293 attempts. Despite being sacked eight times and throwing for six interceptions, Dalton has averaged nearly 220 passing yards per game. Additionally, he has a 167 quarterback rating going into the Rose Bowl game and has rushed for 407 yards on the ground.

Dalton’s most prominent game of the 2010 campaign came in the team’s most important match. Against sixth-ranked Utah, Dalton exploded for a career-high 355 passing yards and three touchdowns in 21-of-26 attempts.

“This ranks up there with any game I’ve played,” Dalton shared as soon as the game ended. “I have grown up. My team relies more on me now to make plays and not just manage the game.”

The Horned Frogs would have to rely on him more in their upcoming game, but Dalton has help in the running game with several receivers who are still hungry to win.

For the year, sophomore running back Ed Wesley has carried the running load for TCU. After 12 games and 162 rushes, Wesley has rushed for 1,050 yards and 11 touchdowns. Wesley is averaging 87.5 rushing yards per game and 6.6 rushing yards per rush. He could easily become the most dangerous asset for the Horned Frogs to utilize against the Badgers.

Four additional tailbacks have carried the ball for TCU, but none has come closer to Wesley than sophomore Matthew Tucker. He has 694 rushing yards in 144 carries, while collecting seven touchdowns. One could argue that this is one of the best tandems in the nation, and success at the Rose Bowl would only add support to that argument.

Redshirt freshman tailback Waymon James has rushed for 489 yards on 83 carries, and sophomore running back Aundre Dean has collected 223 yards after 32 carries.

On the receiving end, Dalton has several receivers whom to target. However, redshirt freshman Josh Boyce has been the statistical leader. Boyce has 602 receiving yards with 33 receptions and six touchdowns in 11 games played. Senior Jeremy Kerley has led TCU with 50 total catches, 10 touchdowns and 517 receiving yards. Jimmy Young and Bart Johnson have contributed significant playing time as well, racking up 429 and 396 receiving yards, respectively.

This is just one way of describing the talented TCU squad, especially on offense where they have completely dominated most teams throughout the entire season. With size, speed and courage, many positive results can come on the football field.

What can be argued about TCU’s offense can be easily argued for their defense as well. The Horned Frogs have been impressive all year long.

They hold two shutouts, one against Colorado State and the other versus Wyoming. In fact, the Horned Frogs have held their opponent to seven points or less in seven of their 12 games played this season.

One prominent defensive statistic that the Horned Frogs have is allowing only 136 first downs against all their opponents. This is primarily why TCU has not surrendered a lot of points in games. Two of their other defensive successes have come in their rush and pass defense. TCU averages giving up only 89.2 on the running game, while relinquishing 126.2 passing yards. The passing game is where TCU has been very successful, and that has helped the defense in not allowing big plays from the line of scrimmage. In fact, all great defenses feed off that because it boosts their confidence level.

Out of 151 tries, opponents have only converted 33 third downs. And that is where the defense has mostly shined. Not allowing many third down conversions has given TCU’s defense a lot of rest, and that has granted TCU’s offense more playing time to pound additional points on the scoreboard. That has been the story of the Horned Frogs: Defend first and score next!

The defense has been most effective and efficient in the fourth quarter, which is when they allowed the fewest points (a total of 28). In total, TCU has allowed 137 points: 45 in the first quarter, 33 in the second quarter and 31 in the third quarter. TCU just gets better as the clock nears its last second.

Throughout the season, sophomore linebacker Tanner Brock has guided the defensive side of the ball for the Horned Frogs. Brock has amounted 97 total tackles, 53 unassisted. Also, he has two sacks and one interception, proving that he is a versatile player.

Senior safety Tejay Johnson and junior linebacker Tank Carder were recently named to the AP All-America team. They, too, have been instrumental in the success of TCU’s defense. Johnson has registered 56 tackles and three interceptions, while Carder has 54 tackles, 2.5 sacks and one interception. In addition to that, Carder is tied for second with five pass breakups while adding a fumble recovery. While tying for the team lead with three forced fumbles, Johnson also has three pass breakups in a year that has seen him develop into a top defensive back in the nation.