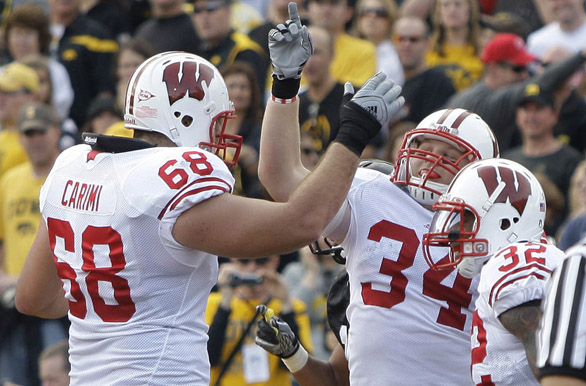 The fifth-ranked Wisconsin Badgers, members of the prestigious Big Ten Conference, finished 11-1 overall and 7-1 in league play. Their near-perfect record in conference action led them to earn the top spot and the automatic berth to the Rose Bowl in Pasadena.

Are the Badgers the favorites to win the 2011 Rose Bowl? Not necessarily, but the Badgers hold a substantial difference over their opponent that could lead to predictions of them as the winners in the bowl game. The Badgers played a much tougher schedule of foes throughout the season in comparison to TCU, who only played two ranked opponents.

Before losing their only game of the season, the Badgers collected four consecutive victories that included the season opener at UNLV by a score of 41-21. In that game, a balanced attack both in the air and on the ground provided a meaningful spark for the Badgers in their 24 points scored in the third quarter. And their defense stepped up in the second half: They went on to allow only one additional touchdown.

Following the victory over the Rebels, the Badgers produced two close wins over San Jose State (27-14) and Arizona State (20-19). Then, Wisconsin ran past Austin Peay by a remarkable score of 70-3. In that particular contest, two different Badgers ran for over 100 yards (James White and John Clay).

“We’ve got a great running back in John Clay, and I just follow his lead and do what I have to do to help this team,” White said after his performance.

Clay rushed for 118 yards and a touchdown but commended White’s results (145 yards and four touchdowns).

“I was very excited for James,” Clay stated at that time. “I was always the first one running right next to him when he came off the field and congratulating him.”

Despite their early success on the field, the Badgers stumbled at Michigan State 34-24. However, the MSU Spartans were arguably the best team in the Big Ten, so the Badgers’ loss really does not look bad because it came early in the campaign, on the road and against a tough opponent.

In reality, what won the affair for the Spartans was their ability to stop the Badgers’ running game. Clay pointed this out after experiencing the defeat.

“They know what’s our strength,” he said. “They started loading the box. They tried to stop the run game. I was able to work around in the second half, getting the ball out around the perimeter to help us out more.”

After the loss, the Badgers bounced back with seven straight wins, including two against perennial football programs. Their biggest win of the season came versus the then-top-ranked Ohio State Buckeyes in a 31-18 result on Oct. 16.

“I challenged our offensive line at the beginning of the week,” Wisconsin coach Bret Bielema said of the win. “If we’re going to have success, it starts with you guys.”

The Badgers went on to grab another important victory, which came on the road over Iowa 31-30. Subsequent wins over Purdue, Indiana, Michigan and Northwestern made their overall record even more significant in the polls and for the BCS standings.

For the season, the Badgers averaged 43.3 points per game on offense. The rushing strategies led the attack in this instance after the squad accumulated a total of 2,968 yards on the ground, while airing out 2,434 passing yards.

Their offense is primarily the run game, which has controlled the tempo of all but one game this season. Per game, the Badgers have averaged 247.3 yards on the ground while netting 46 total touchdowns and 5.5 yards per rush.

The passing game has not been bad whatsoever, but Wisconsin’s ability to run the ball more efficiently has quieted the arm of senior quarterback Scott Tolzien. For the year, Tolzien has tossed for 2,300 yards and 16 touchdowns on 182 completions with just six interceptions.

Clay, a junior, placed in the AP All-American third team. He has rushed for 936 yards with 13 touchdowns, while White has amounted 1,029 yards and 14 touchdowns. Sophomore running back Montee Ball has contributed to the success of the running attack, having collected 864 yards and 17 touchdowns.

This is why the Badgers hold a stronger chance of winning the Rose Bowl, but they have solid offensive linesmen as well. Seniors Gabe Carimi and John Moffitt were named to first team of AP All-America. Additionally, Carimi won the 2010 Outland Trophy and is awarded the best U.S. college football interior linesman by the Football Writers Association of America.

On top of that, senior tight end Lance Kendricks earned second-team AP All-America honors after having been a finalist of the Mackey Award that is given to college football’s most outstanding tight end.

Carimi, Moffitt and Kendricks have been an integral part of the blocking schemes for the Badgers, which has led to multiple successes of their rushing game. However, the Badgers’ receiving team has had its positive outcomes as well.

Kendricks caught a total of 39 balls for 627 yards and five touchdowns. Another key receiver is junior Nick Toon, who registered 33 receptions and three touchdowns.

Wisconsin’s offense was the predominant reason the team held off foe Big Ten co-champions Ohio State and Michigan State in the BCS standings.

“They’re a special group,” head coach Bret Bielema said of his Badgers. “They believe in something bigger than themselves.”

The Badgers are heading back to Pasadena for the first time since 2000, having a three-game winning streak in Rose Bowl game appearances. TCU presents a tough matchup. “They play extremely hard, play extremely tough,” Bielema said of the Horned Frogs. “One thing that was very common amongst everybody that had seen them either play or practice is just how hard they play and how tough they are individually.”

Wisconsin’s strategy for the affair will most likely see them using their 17th-ranked running game as their prime tool to wear down the TCU defense. It should work.

“I think the thing that jumped out to me right away when TCU began to have success under Coach Patterson was how well they play defensively and what they do. So it’s going to be a unique challenge for us,” Bielema stated during the Rose Bowl teleconference.

“They’re a little bit different than the routine stuff that we see here in the Big Ten. But it was kind of interesting. I would always kind of grab some scouts, NFL scouts as they came through, and we don’t see TCU much,” Bielema added. “Obviously, little glimpses on TV that I’ve been able to capture all year. But all those things people commonly said was how well coached they were, how hard they play and how fast they play.”

On the defensive side for the Badgers, the group’s primary problem will be TCU’s senior quarterback Andy Dalton, who has been a 41-game winner as a starter at TCU.

“We have grown up a lot from last year,” Dalton said of their success this season. “We have a lot of guys who played in the [Fiesta Bowl] last year, so hopefully we will have grown up and taken the experience and allowed it to help us.”

Dalton seems confident in winning yet another game, but the Badgers defense is looking to simply shut down TCU’s passing attack in order to outlast the Texas program.

“I think we’ve done a lot, not just what TCU’s done, but non-automatic qualifying schools,” Dalton pointed out. “We still have one more game, and we’ll go out and prove how we play and hopefully people will see that.”

One player who will have a definite say in how Dalton performs during the Rose Bowl is junior defensive end J.J. Watt, who earned second-team AP All-America honors for his outstanding play. More importantly, Watt won the Lott Trophy that honors on-field performance and personal character among defensive players.

Watt led the Badgers with 21 tackles for loss, 10 quarterback hurries and seven sacks. Watt also forced three fumbles, recovered two, had an interception and blocked three kicks. He is the first Wisconsin player to win the award, and he is aiming to add to those honors during the Rose Bowl.

“This is unbelievable,” Watt said during the banquet. “This is definitely one of the best moments of my life thus far. It is such an honor to be mentioned in the same sentence as Ronnie Lott. I have to give a lot of credit to my mother and father for raising me and teaching me good morals and values.”