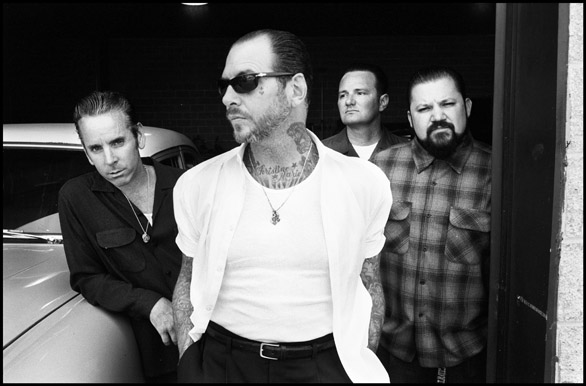 2011 is almost here, and by the looks of things it’s going to be another good year for music. Here are some album releases, tours and a couple of books you can look forward to enjoying in the New Year.

There’s a bit of confusion (very Oasis-y) over the U.S. release date; Britons, however, will be able to purchase their copies on Feb. 28. The following release dates are firm as of press time:

Attackhead, Voices in the Dark – Second Attack (Twisted Hillbilly): SoCal thrashers recorded this one in Tennessee.

The Get Up Kids, There Are Rules (Quality Hill): Catch them live Jan. 27 at the Troubadour.

John Vanderslice, White Wilderness (Dead Oceans): A live one with the Magik*Magik Orchestra

The Luyas, Too Beautiful to Work (Dead Oceans): Jessie Stein plays the Moodswinger (look it up!).

ON THE ROAD AGAIN

Mark your calendar with these show dates.

Kings X – Jan. 13 @ NAMM: If you are going to the NAMM (National Association of Music Merchants) show, you’ll have an opportunity to see an intimate performance by Kings X, followed by a signing session with the band’s DuG Pinnick alongside such legends as Cliff Williams (AC/DC) and Geezer Butler (Black Sabbath.) The action takes place in the Mackie and Ampeg demo room, 209 A/B, at the Anaheim Convention Center.

Blues at the Crossroads: The Robert Johnson Centennial Concerts – Jan. 29 @ Orange County Performing Arts Center: Johnson was the bluesman who supposedly gave his soul to the devil at a crossroads in Mississippi in exchange for musical talent. This is the 100th anniversary of Johnson’s birth, and honoring him are David “Honeyboy” Edwards, Hubert Sumlin, Big Head Todd & the Monsters, Cedric Burnside and Lightnin’ Malcolm.

Creatures From the Black Abyss Tour – Feb. 8 @ Club Nokia: English band Cradle of Filth is the headline act for this impressive lineup that includes performances from Nachtmystium, Turisas and Daniel Lioneye. Cradle of Filth has a VIP ticket package on offer that includes a general admission ticket, a meet-and-greet, a signed poster and a commemorative VIP laminate. artistarena.com/cradleoffilth

The Ready Set – March 24 @ The Roxy: Jordan Witzigreuter, better known as the Ready Set, embarks on his first-ever headlining tour. Witzigreuter’s debut EP, I’m Alive I’m Dreaming, was the first release on Pete Wentz’s Decaydance label, and videos from the Ready Set have received lots of airplay on MTV, adding up to this opportunity to top a bill at the Roxy that includes Allstar Weekend, We Are the In Crowd and the Downtown Fiction.

The Parlotones – March 30 @ The Viper Room: South Africa’s most popular band outsells Coldplay, the Killers and Oasis combined in their homeland and a big 3-D concert will be broadcast to the world live from Johannesburg in July. In the meantime, catch this atmospheric pop band when they pull into West Hollywood.

The Dirty Work Tour – April 12 @ Club Nokia: Yellowcard is the opening act for this tour, and the band has plenty of new music to play at the time since their seventh album, When You’re Through Thinking, Say Yes, drops on March 22. All Time Low headlines. The tour also stops at the Grove of Anaheim on April 15.

Vans Warped Tour ’11: It’s never too early to start planning a visit to the Warped Tou,r and the lineup for the festival is already starting to take shape. Acts confirmed so far include Go Radio, We Came as Romans, Dance Gavin Dance, Every Avenue and the Word Alive. The tour opens in Dallas June 24 and closes in Hillsboro, Ore., Aug. 14; local stops are July 1 at the Pomona Fairplex, July 3 at Seaside Park in Ventura and Aug. 10 at a Los Angeles venue to be announced.

Judas Priest Farewell Tour: After storming the world for nearly 40 years and taking their very special brand of heavy metal to all four corners of the planet, Judas Priest, one of the most influential heavy metal bands of all time, has announced that they will be embarking on their final world tour. The band promises that the Epitaph Tour will hit every major city in the world, so it’s going to take them awhile to finish up. North American dates have not yet been scheduled, but the tour is slated to kick off in Europe, most likely at the beginning of the summer festival season. Fans wanting to see Judas Priest in Los Angeles should monitor judaspriest.com.

Seasons They Change: The Story of Acid and Psychedelic Folk: Devendra Banhart, Espers and Joanna Newsom are some of the artists credited with resurrecting acid and psych folk. This very detailed tome (available Jan. 1) from Jeanette Leech and Jawbone Press rewinds 50 years to a scene that featured the Incredible String Band, Pearls Before Swine, Vashti Bunyan and dozens of other performers who originally defined the sound, explaining how it all led to today’s scene.

Thee Psychick Bible – The Apocryphal Scriptures ov Genesis Breyer P – Orridge and Thee Third Mind ov Thee Temple ov Psychick Youth: Thee Temple of Psychick Youth, you may know, was a crucial influence on youth culture throughout the 1980s, popularizing tattooing, body piercing, “acid house” raves and other ahead-of-the-curve cultic flirtations. The leader of the TOPY movement was Genesis P-Orridge, co-founder of Psychick TV and Throbbing Gristle, the band often credited with inventing the industrial music genre. All of these things inform this lengthy manual on practical magick. Thee Psychick Bible is published by Feral House and available in deluxe paperback in January.