Not a Good Note 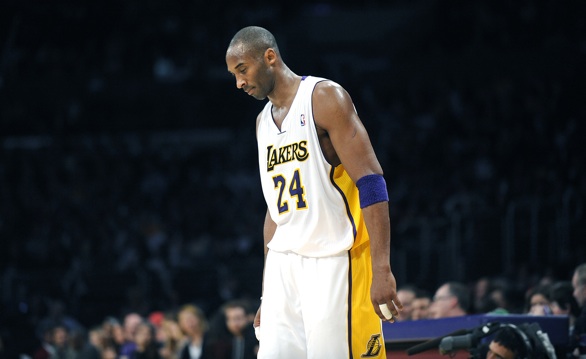 Kobe Bryant walks off the court during a timeout against the Grizzlies at Staples Center on Jan. 2.
(Credit: Wally Skalij/Los Angeles Times/MCT)

The two-time defending champion Los Angeles Lakers ended 2010 with a win, but began the 2011 year with a disappointing loss to the Memphis Grizzlies. Sunday’s 104-85 defeat at Staples Center came at the hands of a sub-500 squad. Granted, the Grizzlies are a professional team full of talent and the NBA does have upsets, but the margin of the loss comes as a surprise.

“I’ll just say they came out tonight and got outworked by a team that played Saturday night, lost in Utah, had to fly back in here for a ballgame,” head coach Phil Jackson tells reporters during the postgame press conference. “I think we took for granted the fact that we’ve been beaten in Memphis and everybody thought we were going to come out here and play better and no one took responsibility on themselves to play better.”

What’s wrong with the Lakers? There is a lack of urgency and motivation in them. This current flaw will probably be fixed, but it will come later rather than sooner if their focus continues to be nonexistent.

On New Year’s Eve, the Lakers struggled to attain a 102-98 victory over the visiting Philadelphia 76ers, but a win is a win.

However, Los Angeles failed to grab its first win of the year against Memphis. On 10-of-22 shooting, Kobe Bryant posted 28 points in nearly 31 minutes of play.

“We didn’t execute well, and defensively we were poor. We’ve just got to come out focused and ready to play,” Bryant tells reporters after the game. “It’s tough when you have to try to regenerate that energy every single night. It starts individually. You have to look at yourself and try to find things to get you going. Right now we can’t beat anybody, but we’ll be fine.”

Twenty-one of Bryant’s 28 total points arrived in the second half, but the Lakers never managed to make a significant run or rally to complete a come-from-behind win. They are now 23-11 while the Grizzlies moved their record to 15-19.

“We feel like we can play with anybody, and we should have a better record than we have,” Memphis point guard Mike Conley remarks. “We’ve laid eggs here and there, but we’re working hard to become a more consistent team.”

In his third game back on the starting lineup, center Andrew Bynum registered nine points, 11 rebounds and five blocked shots in 26 minutes. He agrees with Bryant’s point of view. “We’re not really playing together, and as a result, it’s costing us,” Bynum says to the media. “Right now, we’ve got to be concerned.”

The Lakers only had two other players with significant offense, Shannon Brown (11) and Pau Gasol (10); Ron Artest was held scoreless as Lamar Odom was shut down at seven points.

Memphis inflicted a 19-4 run in the third quarter en route to taking a 17-4 edge while the entire Los Angeles fan base screamed boos in disappointment with their team. The Grizzlies outscored the Lakers in each of the four quarters by five, four, eight and two points, respectively. However, the main difference of the contest came after halftime, when the Grizzlies led by only nine, because Memphis came out firing in the third quarter. Jackson and the Lakers find themselves atop of the Pacific Division with an eight-game lead over the Phoenix Suns, but they are in third place in the Western Conference standings while being six and a half games behind the San Antonio Spurs.

“Good teams are looking at us like we’re soft,” Bynum adds.

The Dallas Mavericks are in second place, and the Lakers now have to look over their shoulders to see who is chasing them (Utah Jazz, Oklahoma City Thunder, Denver Nuggets and New Orleans Hornets).

The Lakers head to the Suns’ court Wednesday, Jan. 5, and close out the week with two affairs at home versus the Hornets (Jan. 7) and New York Knicks (Jan. 9).