“Hoboken to Hollywood”: Now-April 23 @ Edgemar Center for the Arts 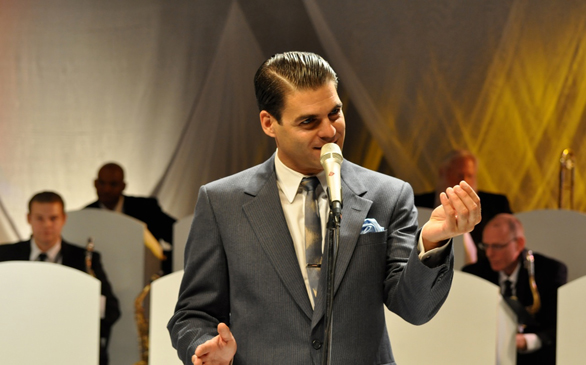 Crooner Luca Ellis brings classic hits from the Great American Songbook to life with charm and a touch of elegance. With a voice comparable to Frank Sinatra, Ellis finds his way into your heart with his rich vocals in “Hoboken to Hollywood.”

“Hoboken to Hollywood” revolves around Ellis’ renditions of the most unforgettable classics like “That’s Life,” “Black Magic” and “Blue Moon.” The show is technically a concert, but has a loose storyline that is mostly unnecessary. Ellis’ voice and the Paul Litteral Orchestra are enough to capture the audience’s attention.

The only concept of the script that works for the show is the camerawork. The cameramen in the show record Ellis and the band performing live, and it adds an outstanding element to the show.

Ellis’ vocals are top-notch, but he is nearly irritating with his overconfidence. It is no wonder he has made a living portraying Frank Sinatra in multiple shows, many in Las Vegas. A recording of Ellis could easily be confused with Sinatra’s tracks; the two sound that similar.

The set and costumes are gorgeous and recreate the vibe of an old-time Vegas nightclub flawlessly. Ellis looks sharp as the crooner, as do the rest of the cast and orchestra. The stage itself is absolutely stunning.

The orchestra doesn’t miss a note, and often times they upstage Ellis himself. The band has talent and soul.