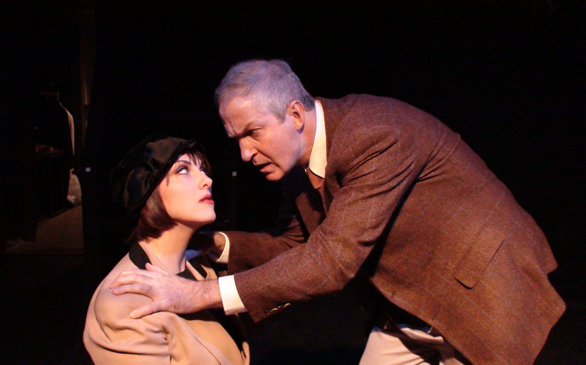 If you fancy a British farce, “Bullshot Crummond and the Invisible Bride of Death” will be to your liking. The sequel to Ron House’s 1972 internationally recognized comedic play, “Bullshot Crummond,” will keep you dying of laughter.

After Bullshot Crummond (The Social Network’s Oliver Muirhead) vows to his new bride Rosemary (Anastasia Roussel) that he is giving up his detective work, the duo embark on the most absurd adventure. They stop at nothing to save England and stop Otto Von Bruno and his lovely Lenya from stealing the Crown Jewels.

One of the craziest things about the entertainment world is that you see someone like Muirhead in one of America’s top movies of the year, The Social Network, and a short time later performing in this play for less than 40 people. Nonetheless, Muirhead delivers a fantastic performance as the ornery yet lovable Bullshot Crummond. Roussel and Katie Boeck are also hilarious and glamorous in their roles.

Rodger Bumpass, whose voice you will recognize as Squidward from “SpongeBob SquarePants,” really keeps the laughs coming. His timing is genius, and his oddball characters give him much room to play.

The absurdity of “Bullshot Crummond and the Invisible Bride of Death” is the closest anyone has come to “Noises Off” in quite a while: The show’s whirlwind of mixed exits and entrances definitely resembles that same tone.