A Taste of Bike Culture 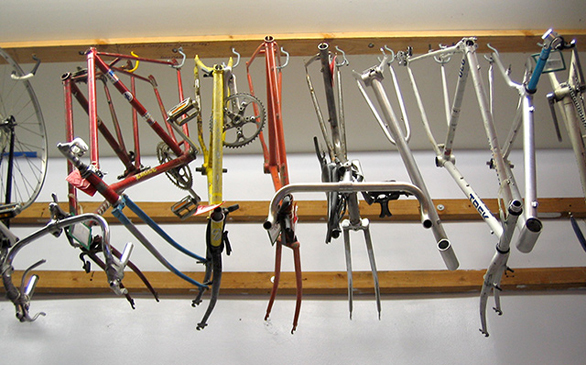 This is not a bike store. The Bicycle Kitchen is a movement using education as its founding force. I remember walking into the small shop located on the corner of Heliotrope Drive and Melrose Avenue and being greeted by two guys wearing aprons. Inside were bikes and tools like wrenches and tires and cabinets filled with spare bike parts like handlebars and brakes. Up on the ceiling hung used bikes and bike frames – the basic bicycle skeleton when you strip down the wheels, seats and handlebars.

These “cooks” explained to me the purpose of the Bicycle Kitchen: It’s a space where you can come fix your bike and use any of their tools, from fixing a flat tire to building up an entire bike from scratch. You can use everything for free, and they won’t turn you away for lack of funds; the only thing they ask is a suggested $7 donation for the use of their space.

“But I’m totally new at this whole bike thing,” I said timidly.

The cooks had an answer for that, a term they called “Project Bikes.” Basically, from their stack of used bikes, you can build up a bike with the help of their cooks, pricing the bike based on its condition and the amount of hours it might take to use their facilities. In my head, this was a sweet deal. I would actually learn to build my own bike. So I signed up for an appointment the next week.

The Bicycle Kitchen, or as some may call it the Bicí-Cocina, started back in 2002 by bike messenger Jimmy Lizama in the Los Angeles Eco-Village. With co-founder Ben Guzman, the kitchen moved to its present location in 2005. This was the lore handed down to me in a phone conversation with fellow cook Ma Bell, who at her core just loves bikes.

“We believe in change from the bottom up,” she says.

The Kitchen’s mantra, besides believing the bike to be both fun and accessible, is to “foster healthy urban communities and to provide a welcoming space to learn about building, maintaining and riding bicycles.” There are occasional workshops such as “Basic Wrenching” and “Intro to Wheel building,” and on Monday nights they provide services specifically for women and transgendered only.

I came in on a cold Tuesday night to start on my Project Bike. I first had to choose from their selection, a slew of old incomplete bikes needing a touch of love and oil. The cooks helped me choose a step-through frame that wouldn’t hurt my lady parts when I stood up on it. Plus, it had a Venice Beach bicycle license from 1975. What was missing, and what I would need to work on, was putting on handlebars, aligning the wheels, putting on chains and brakes, among other things. Definitely a lot of hard work for a bike the cook priced at $40.

Throughout the process I would have different cooks help me out, but Alessandro Delfanti, a visiting sociologist from Italy, gave me the most help. He had worked in a bike shop in his hometown, so it was natural for him to drop in to the Bicycle Kitchen to share his talents.

“I volunteered on a regular basis for a few months, and you just have to show that you care about the kitchen, you know the rules and you know some basic wrenching, and then they vote you in,” he says.

He made sure that he wasn’t the one building the bike for me, so it wasn’t a great idea to wear my white sweater while wrenching greasy handlebars into place. My neighbor working on her bike next to me was traveler Ryan Lindsey Bartz who needed some work on her pedals.

She explains, “The people I met are amazing, and you just want to come back more. They’re very encouraging and help me learn what I was doing, and when I felt I had no idea about anything mechanical – I felt like ‘get out of here’ – but they were like, ‘No, it’s OK.’”

Bartz continued, “It’s just exciting when you make something yourself and then you get to ride away with it every day.”

Everyone knew each other in the kitchen, and luckily I was there to share the family love, pausing work on my bike to participate in a white elephant gift exchange. They didn’t even know me, and I was already stealing away someone’s gift.

I still have a couple of days to go in the bike kitchen before my bike is finished and ready to ride, but the idea of spreading bike culture throughout metropolitan Los Angeles through this method of education and comradeship is a powerful statement that bike culture is alive and growing one bike at a time.