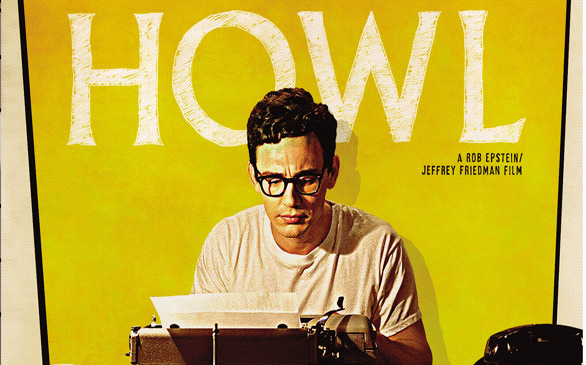 The Majors: James Franco is having a career year. The young Renaissance man stars as Allen Ginsberg in Howl, the story of one of the key works of the Beat Generation. A stellar cast, including John Hamm, Jeff Daniels and David Strathairn, brings to life the ensuing obscenity trial.

George Clooney is a professional killer on the eve of retirement in The American. The director of Control (Anton Corbijn) crafts a deliberate, small-scale film in the tradition of the 1970s, examining the quotidian and existential realities of such a character.

Funny Business: Paul Rudd and Steve Carell star in Dinner for Schmucks, a remake of the French film The Dinner Game. Rudd plays a rising executive who is initiated into a game played by his colleagues in which they each try to bring the dumbest dinner guest (Carell) for the others’ amusement. A hilarious supporting cast includes Zach Galifianakis, Jemaine Clement and Nick Kroll.

Martin Clunes (“Doc Martin”) stars as a manipulative womanizer who gets in over his head as murders seem to follow him around in the blackly comic BBC miniseries Dirty Tricks.

Stranger Than Fiction: While many younger viewers may only know her as a lampooner of red carpet fashion faux pas, Joan Rivers was actually a groundbreaking comedienne when she broke out in the late ’60s. Joan Rivers: A Piece of Work is an intimate look at the irreverent as ever 76-year-old performer, past and present.

Giants fans can relive the glory of the championship season with the eight-disc San Francisco Giants 2010 World Series Collector’s Edition. The set includes complete games from the series, with the option of multiple audio tracks from Fox TV to Giants Radio and Spanish language, as well as NLCS games four and six, plus player interviews, regular and postseason highlights and more.

The Horror! The Horror! In The Last Exorcism, an evangelical preacher, fed up with extorting money from people’s faith, takes a documentary crew along with him to perform his final exorcism on what he expects is yet another religious fanatic. What he finds rocks him to the core of his beliefs. Shot to great effect in the faux-documentary style, it is one of the more effective horror films of late.

Renée Zellweger is a social worker who rescues a girl from her abusive parents only to discover something entirely more ominous at work in Case 39. Ian McShane and Bradley Cooper co-star.

Amber Heard and Odette Yustman are two American girls on the perfect vacation in Argentina until one of them goes missing in And Soon the Darkness. Now, the other has to race against the clock to find her friend before it’s too late.

Can’t get enough of “The Walking Dead?” Check out France’s answer to the zombie apocalypse in The Horde.

Under the Radar: Sundance film The Immaculate Conception of Little Dizzle is a bizarre, blackly comic journey through the world of midnight janitors, unauthorized experiments and male pregnancy. David Russo creates a singular blend of visual style and narrative quirkiness, with psychedelic animated sequences by Dutch animator Rosto.

Also available: Map of the Sounds of Tokyo, Soul Kitchen

Made in Japan: Originally released as Dragon Ball: The Movie, Dragon Ball: Curse of the Blood Rubies is the feature film that started the most successful franchise in anime history. Goku and his friends Bulma and Master Roshi must stop the evil King Gurumes from collecting the powerful Dragon Balls.