Season of the Witch: The Timeless Tale of the Scapegoat 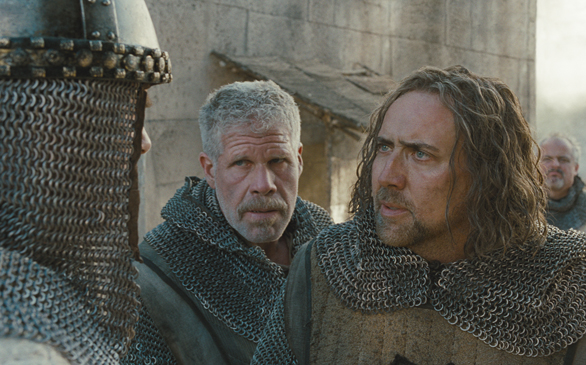 Ron Perlman and Nicolas Cage in Season of the Witch
(Credit: Relativity Media)

There is something incredibly fascinating about witches. Society (and it seems every society in history) has taken to the appeal of the witch hunt, charging and branding innocent people in order to calm their general conscious when things begin to go wrong. The United States first felt its effects in 1692 in Salem, Mass., when innocent men and women were accused of being witches. As punishment they were drowned, stoned, burned at the stake and several other horrific forms of death.

Again in the 1950s, an alternative though no less sophisticated witch hunt ensued, led by ringleader and self-proclaimed commie-hunter, Joseph McCarthy, whose tirade on Hollywood and liberal enthusiasts ruined careers by edict, though, thankfully, not by death.

In Season of the Witch, the elders of the church accuse one woman of causing the Plague, which has reached every corner of Earth in the film set in the 14th century. To save the people from the disease that deforms the faces of its victims and kills them in possibly the grossest way possible, the church sends Behmen (Nicolas Cage), a heroic Crusader who has become jaded by the brutal warfare he witnessed in the name of God. Hoping to escape their duties and retire quietly, Behmen and his fighting partner Felson (Ron Perlman) are caught and called before the local cardinal (Christopher Lee). The knights must help the church end the Plague or face their punishment for deserting their duties.

The source of the evil that has cursed the people supposedly lies in one girl (Claire Foy) and the witchcraft she is accused of employing to perpetuate the Plague. Behmen and Felson can redeem themselves only by transporting the witch to a faraway abbey where the monks will hold a trial for her. On their journey through the mountains, over rickety bridges and across foggy forests, the group is joined by a con man who knows the route (Stephen Graham), another knight whose family was ravaged by the Plague (Ulrich Thomsen), a young man who yearns for knighthood (Robert Sheehan) and an idealistic priest (Stephen Campbell Moore).

“There was a lot of belief in witches and enchantment at the time, but the trials weren’t exactly fair,” says producer Charles Roven. “Once we read it, we couldn’t get it out of our heads. It’s not just a period film. It’s an action adventure that takes place in the period. The writer, Bragi Schut, peopled it with relatable, three-dimensional characters. So beyond its wonderful genre elements, there’s more than enough meat on the bone to keep it interesting.”

The screenplay came to the producers’ desks with a substantial amount of buzz. Writer Bragi Schut won one of the world’s most prestigious writing competitions, the Nicholl Fellowship offered by the Academy of Motion Picture Arts and Sciences. Roven and fellow producer Alex Gartner were immediately drawn to the script, citing that the “combination of elements is what set this story apart for us. Calling it ‘a supernatural thriller set in the 14th century’ is saying it all in terms of the genre pitch, but there’s so much more going on. It will terrify audiences, but because it has great characters, it feels completely real.”

Schut says his father, who was a history buff, inspired him to write Season of the Witch.

“He told me [the worst time to be alive on the planet] was probably the 14th century, during the ‘Black Death,’” Schut recalls. “By some estimates, three-quarters of the population died in the most severely affected areas.”

Schut soon became fascinated by the Crusaders, the “knights of God” who serviced the Roman Catholic Church, killing uncontrollably often-innocent bystanders in the name of the Lord. They sought to return control of the Holy Land to Christian hands and to make a pretty penny for the church while they did so. Hence, Behmen and Felson, weary knights who return to find a scary illness sweeping their homeland, were born.

“Europe was just coming out of the Dark Ages at this point,” Roven says, vouching for the validity and believability of the script. “Most of the people lived in abject poverty and ignorance. When this disease came, they couldn’t figure out what was causing it or how, but entire communities were being completely wiped out. As has happened throughout history, when something couldn’t be explained, people became very superstitious. The cause of it was your neighbor, the farm girl down the street, the butcher, the innkeeper.”

To bring the script to life, however, cast and crew were taken to the far reaches of the world and to relatively uncharted land, both an honor and a risk. The film hired researchers to replicate a painstakingly perfect production design to enhance its authenticity. The filmmakers traveled to Austria and Hungary to find the mystic land with storytelling capabilities.

“Hungary was our hub, but we spent time in Vienna and Salzburg as well,” says director Dominic Sena. “The big forests, the monasteries and castles were mostly in Austria. We used a soundstage in Hungary to build the big set pieces, and there were quite a few. This is a dark story, not a ride through a beautiful green forest. The trees had to be dead and everything had to be barren to convey the right mood, so everybody just knuckled down.”

It was much more difficult than just pushing through production, especially while filming in late November when a strong wind, rain, snow and hail halted the shoot. Temperatures even dropped below freezing for several weeks.

However, Cage claims to be “a weather enthusiast. Any time there’s a storm brewing, I get excited. That kind of dramatic atmosphere helps infuse real emotion into the story. It only made me feel more connected to the material. Dom and I had a few laughs about it, because we were both thrilled by it.”

“I’ve always wanted to make a movie that would allow me to experience beautiful, mountainous terrain,” adds Cage. “When I got this script and realized I would be in the Austrian Alps on a horse, I just wanted to get out there.”

The film’s production designer, Uli Hanisch, drew on Gothic and Romanesque styles of architecture that were popular at the time to build the intricate world of the 14th century. Stunt coordinator Tom Struthers, whose past credits include Saving Private Ryan and The Dark Knight, had the actors go through a rigorous and intensive training to prepare them for the authentic fighting that they would do throughout the film.

Cage spent seven hours a day for three weeks in England learning how to do everything from weave around poles to ride silently through the forest.

“As I learned, I grew to love the horse as a remarkable animal,” Cage says. “The relationship between man and horse is ancient and beautiful. It seems to be the most natural thing in the world. That connection turned out to be the most rewarding part of my experience on this movie.”

Perlman was not as eager as Cage to hop on horses and commit to the many fighting sequences written into the script.

“I’ve never enjoyed fighting the elements,” he says. “The wardrobe folks were the real heroes. They were the ones running in with the blankets and the hot chocolate after we’d just gotten soaked and it was 31 degrees.”

What became the most pivotal role to cast was that of the girl accused of being the witch because of the character’s duality and the constant ambiguity as to her motives. The British newcomer Claire Foy who won the role describes her character as a “sort of a Typhoid Mary. Everywhere she’s been, the Plague has appeared. Therefore, she’s a witch. It says a lot about how women were treated at the time. She’s just a young girl, and all these powerful men are accusing her of something horrific. You never quite work her out, and I think that’s important, because the men don’t either. She’s neither a femme fatale nor an innocent girl, but she is so intelligent that she’s able to pit all the men against each other to get what she wants.”

Cage, who is a seasoned veteran of the business, was impressed by Foy’s commitment to the trade and her natural ability.

“Claire has this enormous instrument,” he admits. “She’s very talented, and incredibly well trained. She is capable of getting to the truth of the character at the drop of a hat.”

With production of Season of the Witch now complete, producer Roven admits it wasn’t all fun and games, but the journey in the film is heavily relatable to our current situation, and he hopes audiences will see that. Like the Salem witch trials and the McCarthy attacks, society can always find it in its heart to blame someone.

“As a filmmaker, I always want the story to resonate with today’s audience,” Roven says. “A lot of things are going on in the world today that have shaken our foundation of beliefs. When we question our beliefs and we don’t have answers for things, we still have a tendency to look for scapegoats.”

Season of the Witch releases in theaters Jan. 7.