CKY: Encourages Fans to Ask Questions and be Catalysts for Change 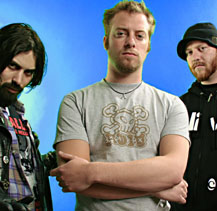 Cable television is proof that people would rather look at anything than at one another. TiVo connections are the new intrapersonal and the ol’ face-to-face is becoming vintage. CKY guitarist/vocalist Chad Ginsburg does not have cable.

"Ever since I got rid of cable I’m not as angry anymore. I’m not so distracted from my focus, which is my art … my music. I have more room to create. Who fucking cares if so-and-so got some award or has a hit video? The physical exchange of ideas is what furthers progression, whether with music, rock ’n’ roll or just a general idea of being content. I’ve always [preferred] to work with musicians who aren’t aspiring to purely be celebrities," says Ginsburg. "I don’t want to have anything to do with all that."

If celebrity is less concerned with talent or ability and more with the illusion of grandeur – the fantasy of flawlessness – then Ginsburg sees CKY as a tool listeners can use to chip away at that illusion, deface popular music’s glossy centerfold and replace hero worship with a peer review system that actually works. Rock ’n’ roll would be alive today if there was a death penalty for "TRL." CKY, Ginsburg insists, wants to make rock tangible again.

"Music now is very hard to trust," he says. "There are a lot of liars out there. Just be truthful. CKY has been as up-front and truthful as possible with everything we’ve done. We mix our own records and write our own songs. If a band is not producing its own music, then it leads me to wonder. Why couldn’t they make their own record? If you make music then you should know how to make it."

Pennsylvania-based CKY emerged from the late ’90s wreckage of jock rock when singer/guitarist Deron Miller and drummer Jess Margera brought their demo to Ginsburg who, working as a producer, was eager to ditch the monotony of working with dead-end bands. After releasing their debut Volume 1 on Volcom, CKY teamed with Island Records in 2001 and released Infiltrate. Destroy. Rebuild, an album that struck a captivating balance between antagonistic rock bravado and warm, unassuming self-confidence – making you love it and fear it at the same time. The band’s follow-up, An Answer Can Be Found, released in stores June 28, strays from IDR’s provocative duality but succeeds with the sheer potency of its conviction.

If MTV promises you earrings, CKY pierces your ears. The band asks fans to question the incestuous nature of the music industry – an industry that finds art and entertainment entwined in constant battle, one where sleeping with the enemy isn’t just allowed, it’s expected. CKY’s critique is, as it should be, self-referential.

"Whether we’re loved or hated in this industry, it’s all better than being ignored," Ginsburg says. "Just be heard. Like with our new album, An Answer Can Be Found, the title is basically saying, ‘Just ask the questions.’ The more questions you ask, the more you’re going to find out. It may not be what you want to know but you’ll definitely learn something. You don’t even have to ask with words … you can do it with actions.

"Asking questions is a catalyst for change," continues Ginsburg. "We’re not trying to write singles; we’re not even listening to singles. But to see a guitar riff turn into a record that kids talk about forever? That shit lasts. That’s what CKY is about."

An Answer Can Be Found is currently available. For more information, visit www.ckymusic.com.