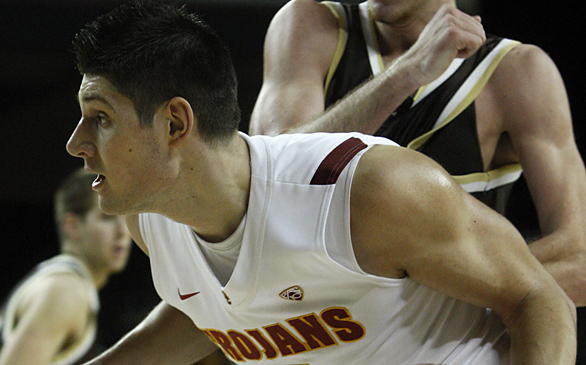 Both programs are rebuilding. Both squads are progressing solidly this year. Both UCLA and USC square off in a Pac-10 showdown this Sunday, Jan. 9, at Galen Center in Los Angeles for a 7:30 p.m. tipoff.

Interesting as it may sound, UCLA and USC do not have any 2011 games prior to their rivalry affair this coming weekend, so both schools will basically have an entire week to prepare for one another.

The UCLA Bruins come into the game with a 9-5 overall record and 1-1 in conference action, while the USC Trojans carry a 9-6 mark and 1-1 in the Pac-10. Currently, both are in the middle of the pack in the Pac-10 standings.

UCLA is coming off of a 74-63 home loss (Dec. 31) to the Washington Huskies, the favorite to be crowned Pac-10 champion this season. Three different Bruins scored in double figures, led by sophomore forward Reeves Nelson’s double-double of 19 points and 10 rebounds. Sophomore forward Tyler Honeycutt and junior guard Malcolm Lee each had 12 points.

A six game-winning streak came to an end for the Bruins, but they really had their hands full with the Huskies at home.

Foul trouble and an injury to junior guard Lazeric Jones plagued the Bruins’ chances of a comeback bid against the Huskies.

“It was hard with the foul trouble, and Zeke ended up getting hurt,” Honeycutt stated. “We both have a good bench; it just went in their favor this game.”

In addition, the Bruins’ inability to be consistent from the free-throw line hurt them as well. Howland gave his opinion on the matter.

“We were 12-for-19 and those foul shots, if you’re going to beat the team picked to win the conference, you have to shoot 80 percent, 85 percent,” he pointed out to reporters. “We did a better job getting it in the second half, but we took a couple of questionable shots late.”

Going into a tough game against the Trojans, UCLA has five players averaging double figures in points. Nelson is averaging 15 points and 8.1 boards per game, while Honeycutt, Lee, Jones and center Joshua Smith each average 14.6, 12.8, 10.7, and 10 points a contest, respectively.

On the other side of town, USC also suffered a home defeat to Washington (Dec. 29) by a score of 73-67 in overtime. However, the Trojans are looking to continue a winning streak since they defeated the visiting Washington State Cougars 60-56 on Dec. 31. The Trojans held a comfortable lead at one point, but almost blew it.

“We almost blew the lead – and didn’t,” USC head coach Kevin O’Neill said after the victory.

USC knew how to take care of the lead regardless of the four-point win, and WSU’s head coach commented on that.

“Trailing USC is really tough because they will melt the clock when they get the chance,” Ken Bone remarked.

After hosting two conference games at home, the Trojans are looking to continue the momentum against the Bruins. Just like UCLA, USC has five players averaging double digits in points. Vucevic leads the pack with a solid double-double average of 15.9 points and 10 rebounds, while junior guard Jio Fontan, freshman guard Maurice Jones, Smith and Stepheson are posting 14.4, 10.3, 10.1 and 10 points, respectively.

Senior guard Marcus Simmons knows the difficulty of Pac-10 play, so he revealed one of USC’s goals for this season.

“Our goal is to win every Pac-10 home game,” Simmons told reporters after the win over WSU.

Being at home and with a boost in confidence, look for the Trojans to be victorious in their clash against the Bruins on the hardwood.