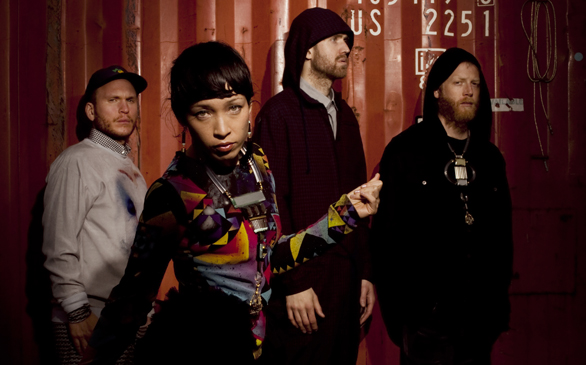 Not every band name tells a story, but the ones that do are worth hearing. Little Dragon, which sounds like it could be the name of the nearest Chinese food restaurant, is a tribute to lead singer Yukimi Nagano’s musical passion and her tendency to flare into fits like a dragon.

“Yukimi would flare up, breathe fire, but we would mostly laugh at her because it was kind of amusing and just a little bit scary,” says Erik Bodin, the band’s drummer. “I think we all have our days, and we knew how to trigger each other off. I thought of the band name one day, called everyone up. It was the first suggestion, and it just felt right for everyone.”

The Swedish techno/pop/soul group formed in 2006 as the result of years of rejection, ambition, patience, crappy side jobs and years of friendship and shared musical taste between four musicians from Gothenburg, Sweden.

The band – Nagano on vocals and percussion, Håkan Wirenstrand on keyboard, Fredrik Källgren Wallin on bass and Bodin on drums – has its roots in a band called Ava, formed by Nagano, Wallin and Bodin while they were in high school.

“We used to just hang out and write songs, jam out. That was our way of having a good time,” Bodin says. “We were all passionate about music so that’s what brought us together.”

“We have definitely changed as people do. I used to be trapped in my headphones. Yukimi was trying to get into music schools. Fred was going to film festivals, smoking a pipe and taking off from school. Håkan was in some abstract place,” Bodin recalls.

For a while Little Dragon played the role of the struggling artist. Nagano sang vocals for different groups when music school didn’t work out, while the other three members played their respective instruments when the opportunity presented itself.

“It has definably been tough, especially for Yukimi, singing with groups that she didn’t identify herself with,” Bodin says. “But we knew it was temporary, plus we needed to pay our rent.”

Paying the rent also meant taking on a number of side jobs at cafes, video stores and liquor stores, selling strawberries and driving trucks and taxis.

When they weren’t working for rent or touring with other bands, the band members would get together and make music that reflected whatever mood they were in. Their structure was minimal, their creation was spontaneous: Bodin would lay down a drumbeat that Nagano would sing to and eventually polished songs like “Test” and “Forever” from their 2007 self-titled debut came into being. The songs make use of Nagano’s soulful pop vocals and the band’s ability to effortlessly weave soul and techno together within a song.

The band cites a medley of singer-songwriter, soul, pop, funk and techno inspirations.

“We love a lot of ’80s music for sure. We’ve been inspired by a wide range of artists, everything from Kate Bush, De La Soul, Prince, Kraftwerk, D’Angelo, DJ Cndo and the list goes on forever,” Bodin says.

The band’s sound, already popular back home, has started to catch on in United States. One of the band’s biggest breaks was the use of their slow and mournful “Twice” during a season 5 episode of “Grey’s Anatomy.” The band also received extensive airplay from 89.9 KCRW.

Up next for the band is a third album due in 2011 and a North American tour with stops in Canada and the northern United States. Kicking things off is a Jan. 7 Los Angeles stop at the Natural History Museum.

“KCRW supported us from the start and our first L.A. show at the Roxy was our first sold-out show ever,” Bodin says. “We have been in the U.S. many times since then without any label support so it feels like it’s all been growing quite natural by word of mouth and people just spreading the word.”

Little Dragon perform Jan. 7 at the Museum of Natural History and Jan. 8 at the Echoplex. For more information, visit little-dragon.se.