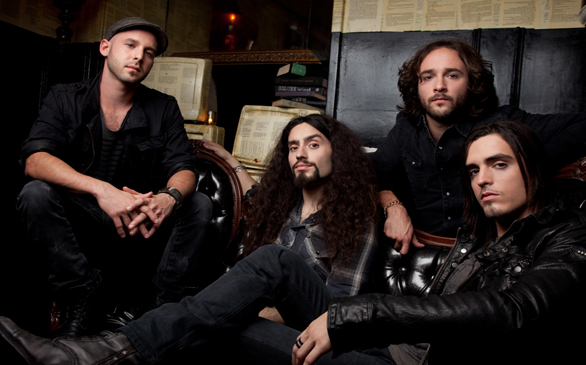 Get Abused Romance's The Sound of Violence Jan. 18.

Abused Romance: The Sound of Violence

Los Angeles rock group Abused Romance is set to release their debut EP The Sound of Violence at iTunes and other digital retailers on Jan. 18. According to singer/guitarist Meir Yaniv, the powerful quartet’s music is often informed by Yaniv’s recollection of growing up in Israel.

“Obviously, growing up in a country that is always at war, you feel it,” says Yaniv. “From the moment you become conscious you know you’re going to serve in the army. The struggle has been there since the country has existed. We ended up in some extreme situations and that’s a part of what we write about. We have songs that directly talk about it like the title track.”

The EP is a prelude to Shine, a full length set to drop in midyear.

Feral House has just released a second edition of Steven Blush’s triptyque through the punk scene of the early-to-mid 1980s, American Hardcore: A Tribal History. Filled with interview pieces with luminaries like Glenn Danzig (Misfits), Mike Watt (Minutemen), Keith Morris (Circle Jerks) and Darryl Jenifer (Bad Brains), the updated American Hardcore has a lot more than the original printing did: Interview quotes from 25 new subjects, 100 new illustrations, a couple hundred new band bios and an expanded discography. A whole new chapter has been added too; “Destroy Babylon” explores the mutant forms of spirituality that came from the movement.

Blush is on tour to promote the book, and he has two local stops: On Jan. 29, he’ll be at Vacation Vinyl (3815 W. Sunset Blvd.; vacationvinyl.com) to host a panel discussion with Brant Bjork of Kyuss and Chuck Dukowski of Black Flag, and on Feb. 3 at Book Soup (8818 W. Sunset Blvd.; booksoup.com) he’ll discuss the history of L.A. punk with Morris and others.

The Jagermeister Music Tour is just about ready to get rolling, and this time out the headliners are Buckcherry, who are celebrating the release of their new single “It’s a Party” from their recent All Night Long album. Also on the bill are Hellyeah, All That Remains and the Damned Things, the super group featuring Scott Ian and Rob Caggiano of Anthrax, Keith Buckley from Every Time I Die and Joe Trohman and Andy Hurley of Fall Out Boy.

The tour kicks off in San Diego on Jan. 19 and hits the Grove of Anaheim on Jan. 21; you can find other tour details, videos from all of the bands and a chat with members of Buckcherry at jagermeistermusictour.com.

Everybody Wants to Be a Cat

Walt Disney Records is set to release an album of Disney movie themes performed by a wide variety of jazz artists. Disney music and jazz artists go back a long way; legends like Artie Shaw and Glenn Miller interpreted songs from Snow White and the Seven Dwarfs and Pinocchio decades ago, and now Everybody Wants To Be a Cat finds singer Dianne Reeves reimagining “He’s a Tramp” from Lady and the Tramp, Roberta Gambarini and Dave Brubeck updating the theme from Alice in Wonderland and the Mark Rapp Quartet transforming “Circle of Life” from The Lion King into a ’70s-style anthem. Sax man Joshua Redman, scat singer Nikki Yanofsky, Regina Carter and Israeli guitarist Gilad Hekselman are among the other jazz cats and kittens contributing to this first in the Disney Jazz series, available Feb. 15.

Attackhead: Voices in the Dark

Orange County band Attackhead has had plenty of fun over the past couple of years bringing their style of thrash metal to the masses and garnering airplay here and in places like Argentina, Greece, Mexico and Belgium with their 2008 Voices in the Dark album. Album sales suffered though due to poor distribution, a situation that has been remedied by Tennessee-based Twisted Hillbilly Records.

Twisted Hillbilly funded a complete makeover of the album allowing the band to re-record the songs, add a couple new ones and significantly upgrade the album’s cover graphic and packaging. The new version of Voices in the Dark drops on Jan. 25 and will be available everywhere including at mass retailers like iTunes, Target and Best Buy.