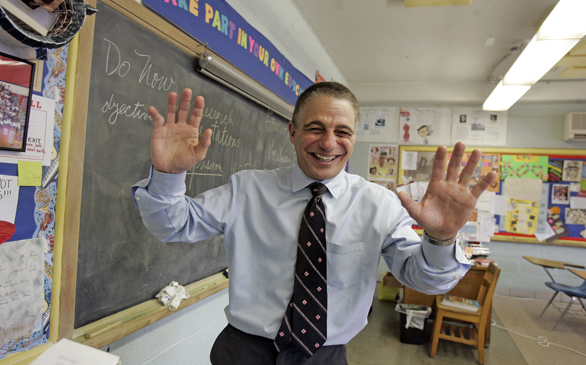 Bank failures, Ponzi schemes and a number of sluggish industries have set the stage for a change in how people live their lives. Men and women who once enjoyed the perks of disposable income (such as vacation time and frivolous shopping) have now been forced to choose between making their monthly mortgage payments or keeping their electricity running. Unlike financial downswings in the past, this recession has not just plagued the poor or the middle class; it’s also hit celebrities and other wealthy elite where it counts: smack dab in the bank account.

Actor Kevin Bacon and his wife Kyra Sedgwick reportedly had their fortunes squandered by convicted felon and one-time financial manager Bernie Madoff. Even Nicolas Cage and rapper Xzibit have reportedly fallen victim to foreclosure. As a result, noteworthy names and faces have had to diversify their talents to stay financially viable in a tough economic climate. Celebrities have begun taking on 9-to-5 jobs.

Actor Malik Yoba has jumped onto the marketing and media bandwagon. This prolific performer has appeared on programs ranging from “Arrested Development” to “Girlfriends.” He is also one of the stars of Tyler Perry’s Why Did I Get Married? franchise. Lately, Yoba is the founder of his own marketing strategy and brand management company based in California. He also earns a living as an inspirational speaker.

In November 2010, Jessica Simpson announced her engagement to one-time pro-football player Eric Johnson. Johnson has redirected his career pursuits to become a life coach. Another former sports star to adopt an office role is Hall of Famer Kareem Abdul-Jabbar. The basketball phenom was a top-rated blogger for the Los Angeles Times.

Actress and one-time talk show host Ricki Lake is a certified doula. These professionals are the natural health version of maternity nurses. They assist women during the rigors of childbirth and also help educate new mothers in matters such as breastfeeding. Lake felt compelled to explore this new career path after the birth of her own two sons and while researching her documentary, The Business of Being Born.

Star of stage and small screen, Tony Danza first captured the hearts of millions in the 1980s when he played lovable housekeeper Tony Micelli on ABC’s "Who’s the Boss?” Recently, Danza committed to teaching at an inner-city high school in Philadelphia. The actor’s journey is chronicled on A&E’s “Teach Tony Danza.”

To many, celebrities becoming closer to everyday people is a breath of fresh air. Many Web sites have commended this new surge in Hollywood’s elite providing accessibility to those who patronize their ventures. However, there is also a growing backlash against many stars stepping into roles that would normally go to private citizens.

Many balked when actress (and recently anointed clothing designer) Lindsay Lohan suggested that she would be pursuing a career as a sober living coach for individuals struggling with substance abuse. Social networking sites like Twitter and Facebook were littered with comments jeering the starlet for asserting that she might be considered a reliable source of assistance to anyone.

Lesser-known Los Angeles-based DJs and club promoters have even been forced to compete with top names such as Ryan Gosling and Devendra Banhart usurping coveted slots at nightspots like the Green Door and El Cid.

Celebrity interests get a boost over those of private citizens because of the built-in following that they bring. While someone may not know a thing about “John Smith” or “Jane Doe,” they can easily unearth plenty of information about Kim Kardashian or Justin Bieber.

But critics warn that fame doesn’t mean you’ll get a better quality product. Sure, an A-list face or award-winning singer can offer a great sound bite on following your dreams, but there is no guarantee that they will deliver their very personal secrets to success. Given the current economic climate, more and more white and blue-collar professions could become desirable to the myriad celebrities looking to rebuild and maintain their fortunes. However, it will be up to the public to decide whether the Hollywood elite should be allowed to keep their fame as well as hone in on the jobs of the everyman.