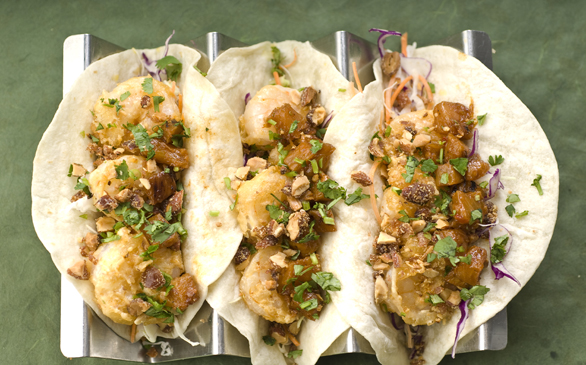 Downtown Los Angeles continues to deliver interesting and delicious options to our culinary landscape. It was my pleasure to find the 2-year-old Casa Cocina Y Cantina, located downtown on Grand Street in the California Plaza. Casa puts their own twist on Mexican fare and does so in warm, inviting and fun environment.

My girlfriend, Kristen, and I arrived at the restaurant a bit early and were pleasantly surprised to find an outdoor bar awaiting us. Yes, an outdoor bar, in Los Angeles, what a novel concept!

While enjoying a Negro Modelo on tap at the bar, our eyes kept focusing on the outside tables behind us. Each table looked like pods, as they had white, high, curved walls surrounding the tables, creating an intimate feel that still keeps you part of the scene. I asked Ryan, the manager, about them, and he said the pods were called “casitas” or “small houses.” We didn’t even bother to look inside the restaurant before deciding we needed to dine in the little casita. Sitting inside you can look up and see the magnificent skyscrapers of downtown and really feel like a part of this great city.

In fact, Los Angeles itself is a major component of what inspires Casa. The menu includes as many local and seasonal dishes as possible and features dishes from other Los Angeles restaurants, which have inspired the chef. It’s a fun way of paying homage to Los Angeles cuisine while putting his own spin on traditional dishes.

As we settled in, it was time for drinks. Kristen started with a special drink for fall –the Autumn Royal, which muddles farmers’ market grapes with tequila, Crème de cassis, agave and lemon juice, topped with a float of Avern. Now, I don’t know what “Avern” is, but I do know it helps make a damn good drink. I had the Pina Fuego, which is tequila, jalapeno puree and fruit juice with a chili salted rim. The combination of the sweet and the hot play off each other perfectly.

The meal begins, as you may expect, with chips and salsa. Standard stuff normally, but Casa provides two salsas, one a smoky red chipotle and the other is a green habanero with sour cream that I ended up putting on all the dishes – it was that good. The coolness of the sour cream balanced out the heat from the habanero while retaining the flavor.

There were many starter options to choose from, including guacamole, tacos and “antojitos” or taqueria-inspired snacks such as mini-tamales, quesadillas and something called turkduckenizo albondigas, which is a seasonal take on the traditional Mexican meatballs. I’m not sure how we ended up not ordering that one, but we’ll rectify that on our next visit.

We did choose one of the chef’s favorites, the shrimp tacos. Three soft tacos stuffed with plump shrimp, lightly fried with caramelized pineapple, walnuts and a spicy crema sauce – the sweet and the hot working together again beautifully.

Now it was time to turn our attention to the meat of the matter – literally. For our mains we chose the birria and the carnitas. Birria is a braised meat dish traditionally using goat as the protein. Casa uses beef short ribs instead, which is very tender and not nearly as gamey as goat meat. The short ribs are fork-tender and melt-in-your mouth delicious. The meat is accompanied by goat cheese stuffed peppers (a nod to the traditional birria) in a hearty red broth.

The carnitas is what you expect and what carnitas should be. Tender pork shoulder, highly seasoned and seared on the outside to retain the juiciness of the meat. For me, I don’t need much more than the meat and tortillas for my carnitas, so the potato and al Pastor-applewood bacon hash that accompanies the dish is a bit of overkill. Tasty overkill but overkill nonetheless. Let the meat do the talking, I say.

For dessert, the chef recommended the rice pudding, which was a cool and refreshing way to end a hearty meal. After dinner, as we sat back in our little casita, enjoying the view of the majestic towers looming above us, we were thankful to call Los Angeles our big casita.

Date Night
Some first choices for dining in L.A. after last call at the bar
1,800 views