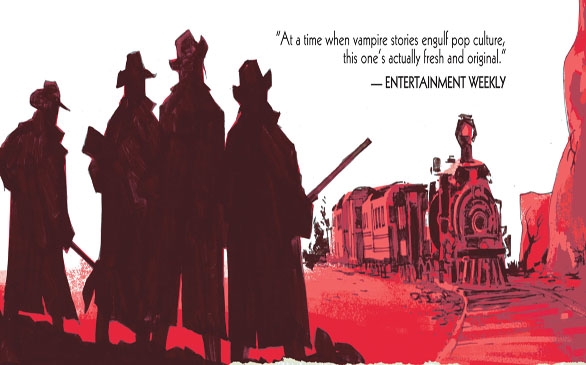 It’s a shame this book did not come out five years ago. There’s been such a deluge of bloodsucker stories in recent years that when one of actual quality comes along it can’t help but become somewhat tainted by all the schlock. As it is, American Vampire still manages to rise above its peers.

The book takes an original form, composed of two parallel timelines that meet in the end. The first story thread, by Scott Snyder, takes place in Hollywood in the 1920s and centers on Pearl, a movie extra trying to make it big who instead falls prey to a gang of vampires. The second storyline, by Stephen King, concerns Skinner Sweet, an Old West outlaw who becomes a new breed of day-walking vampire and sets out to take revenge on the powerful cabal of Old World European vampires that betrayed him.

This decades-spanning tale sets up what promises to be an epic, intelligent take on vampires set against the huge canvas of the American Century. The artwork by Rafael Albuquerque is stunningly visceral, with take-you-by-surprise gore.