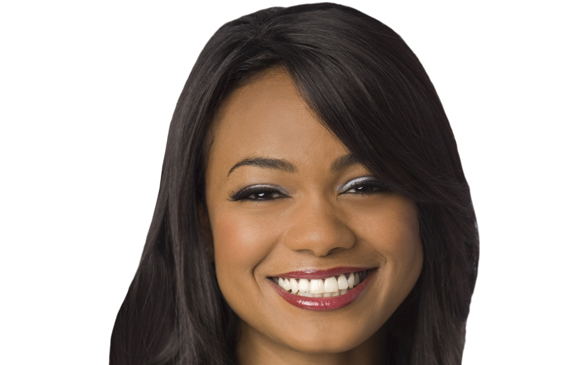 She may have taken the long-haul flight to attempt a television comeback, but Tatyana Ali’s star looks set to shine once again.

This month, the actress is back in TV comedy territory playing a young divorcee who returns home to Southern California for a second chance in life in the sitcom, “Love That Girl!”

“She is a woman on her own trying to figure out her life,” says Ali, whose character is called Tyana Jones.

“They use the last five letters in my name for the character like Martin’s character in the comedy ‘Martin’ uses his first name and Jamie on ‘The Jamie Foxx Show’ is called Jamie,” continues Ali. “She got married very young and is trying to figure out who she is, and the one thing I do love about her is that she is really multidimensional. She’s a dork and a bit neurotic, but she’s also really cool, and I think it’s nice to have a female character that is portrayed in a really holistic way. Someone who is not just a girlfriend and not just a wife and not just a best friend.”

Ali, who’s best known for her role as Will Smith’s youngest sister, Ashley Banks, on NBC’s hit comedy “The Fresh Prince of Bel-Air,” has appeared in films such as Glory Road, The Brothers and most recently Mother and Child.

A Broadway-trained actress, singer and recent Harvard University graduate, Ali took a break after “The Fresh Prince” ended to further her education and majored in political science and African-American studies at the prestigious university.

“I started off in anthropology because I just love learning about cultures and then I took a class in introduction to politics and it moved me, and so I switched,” claims the actress who had to reintroduce herself to casting directors after taking a career break.

“For a time when I graduated, I thought maybe I had made a mistake, but deep down inside, I knew that sounded crazy. For cultivating yourself as a performer, you would hope that in your performances it means you have more to offer,” adds the actress. “I did have to take some time to reintroduce myself to the business, but I don’t think I would have my production company if I hadn’t done it.”

“Love That Girl!” is produced by HazraH Entertainment, the production company helmed by Ali and her sister Anastasia, and was a concept created by Bentley Kyle Evans.

“The whole idea came from Kyle. He is known for ‘Martin,’ and he also created ‘The Jamie Foxx show.’ He wanted to do a new show and came up with this concept of a female-driven show,” explains Ali, who started the company as a vehicle to create more projects with diverse characters.

“I have been in this business for a really long time and wanted to play more multidimensional characters. I knew writers, directors, other actors and producers who were incredibly talented, and we were all knocking our fists against the same doors trying to get projects made that will show that we as African Americans are not a monolithic group, and that there are still a variety of stories to tell that haven’t been told yet. This character is incredibly well written, and I was actually very excited to play her.”

“It’s a comedy with dramatic moments, and it’s pretty funny,” Ali assures. “It’s a dream come true for me, and I just love my character. You get to know the character as you are shooting, and as I get to know her better, I think she is so brave and interesting and is not afraid to be vulnerable. I really like that about her. It’s a show that will make you laugh and let you know that no matter what you are going through in your life, that everything is going to be OK.”