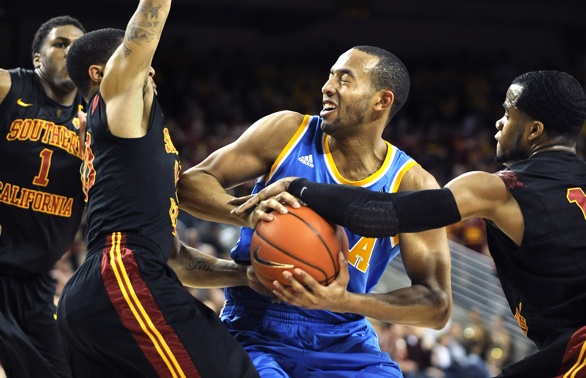 Junior forward Nikola Vucevic amassed 20 points to lead the USC Trojans past the visiting UCLA Bruins, 63-52, Sunday night at the Galen Center in Los Angeles before a sold-out crowd of over 10,000.

“This is the first time I’ve played here that the crowd was with us completely,” USC junior guard Jio Fontan says. “The difference was the students are back in school and really got behind us. It wasn’t like that in our other games.”

Vucevic added four rebounds to his solid performance that saw him shoot nine-of-16 from the field in 34 minutes of play for the Trojans, who improved to 10-6 overall and 2-1 in the Pac-10. Meanwhile, the Bruins dropped to 9-7 and 1-2.

“Once they stopped double-teaming me, I felt comfortable going one-on-one against them,” Vucevic confesses.

The win was the fourth consecutive for the Trojans over the Bruins.

One of the key marks in the game came in the second half as USC forced the Bruins into eight turnovers, which the Trojans converted 11 points on.

“You can see our youth in not handling adversity when things go against us,” UCLA head coach Ben Howland tells the media after the loss.

Senior forward Alex Stepheson scored 13 points on five-of-10 shooting and 16 rebounds, a career high, for a double-double in 38 minutes. Stepheson played without the cast he used to cover a broken bone in his left hand prior to the start of the campaign.

“This guy played 10 games when he shouldn’t have with a broken hand,” USC head coach Kevin O’Neill comments.

Running down the floor for offensive sparks and defensive stops, the energetic Stepheson made his presence felt more than ever before. He even displayed profound emotion after picking up an offensive rebound inside the paint and powering a two-handed slam dunk. A former Harvard-Westlake High School and University of North Carolina Tar Heel athlete, Stepheson knows the importance of the USC-UCLA rivalry.

“It means everything to us,” he says after the victory. “Especially being from L.A., knowing what the rivalry is, it’s huge. It’s bragging rights.”

To begin both halves, the Trojans had strong scoring runs. In the second half, they went on a 12-4 run to gain the lead for good, although the Bruins remained relatively close during the affair. For the last minutes of the game, the Trojans played solid defense to seal the conference victory.v “The stretch we played in the second half toward the end was as active and as good defensively as we’ve been all year,” O’Neill admits.

O’Neill improved to 3-0 against UCLA.

“I guess that’s important around here. USC and UCLA compete. They are the tradition of Pac-10 basketball,” O’Neill states. “Everybody’s measured against them. I feel very fortunate. It won’t go on forever.”v Fontan scored in double figures with 10 points, while freshman guard Maurice Jones registered nine points and four steals. On the other end, the Bruins also had three players reach double figures even though they only shot 39.6 percent from the field, including two-of-nine three pointers. Sophomore forward Reeves Nelson totaled 14 points, but only two of those came in the second half. USC shut down Nelson thereafter, but he also managed to miss some easy buckets. Additionally, he had eight rebounds; he played 17 first half minutes.

“I was pretty tired, but I thought I needed to play that many minutes in the first half because of the way the game was going,” Nelson states.

Junior guard Jerime Anderson had 11 points, while sophomore forward Tyler Honeycutt recorded 10 points, nine boards and committed seven turnovers. Freshman center Joshua Smith contributed eight points although he played most of the second half with four fouls. “He’s just got to learn,” Howland comments on the issue of foul trouble with Smith. “We need him in the game.”

The Bruins held a two-point advantage at halftime, but the Trojans outscored them by 13 in the second period.