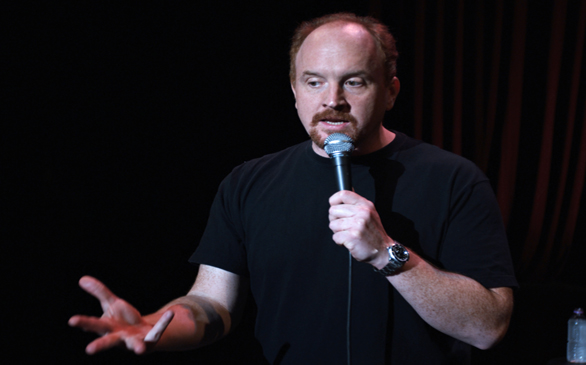 Screw being green, it’s harder being funny. Have you ever tried telling jokes? I don’t mean to a group of people at a family gathering or in your overpriced apartment with your roommates. To get on a stage by yourself and tell one long and continuous and often unrelated story, and to make a correlation between everything you say – that’s some brutal work that isn’t for the faint of heart. Comedy is one of the toughest and most cutthroat industries in this town, and if you can’t take the heat, get off the stage.

A-list actress Rachel Weisz is not a comedian in the professional sense, but she has said, “Comedians don’t have the kind of narcissism that actors have. They’re writers who perform their own material. It’s more interesting. And they’re sexy because they risk more. Stand-up comedians risk more than anyone.”

One such risk-taker started doing stand-up in 1984. He made it to open mic night for the first time and only managed to wrangle a couple minutes worth of material for an unimpressed audience, despite the fact that he was allotted a whopping five minutes for his routine. Rough start doesn’t really cover it. Living and working in Boston, Mass., he was so ashamed of his first attempt that he didn’t try again for another two years. Like all great success stories, he did try again and again and again until he won the audience’s approval and became an important part of the Boston stand-up scene.

His name is Louis C.K., and if you haven’t heard of him, then you are really missing out on something hilarious. Born Louis Szekely in Washington, D.C., he was raised for the first seven years of his life in Mexico City. Don’t be fooled by his looks, he’s not your ordinary white man. His first language was, in fact, Spanish, and he still maintains his Mexican citizenship.

He moved with his mother at the age of 10 to Newton, Mass., a suburb of Boston, when his parents divorced. Before taking up stand-up, C.K. worked as an auto mechanic. Luckily for the comedy-loving world, he gave stand-up another whack and was much more successful than his first attempt. He moved to New York City, the city of people aspiring to make some sort of name for themselves, and he appeared on numerous televised comedy shows including MTV’s “1/2 Comedy Hour,” “Comic Strip Live” and even “Star Search.”

Throughout the ’90s, Louis C.K. worked like a mother trucker, making short films, writing his own material and performing anywhere that would pay. His second successful short film was called Ice Cream and was accepted to both the Sundance Film Festival and the MOMA’s New Directors/New Films Series. It is still shown frequently on Bravo and IFC.

The real turn in his career came when he made his television comedy writing debut. In 1993, “Late Night with Conan O’Brien” hired him to be a member of the original writing staff. He worked for two years and helped launch the show and its star talent, who went on to become the country’s late-night favorite. O’Brien gave him some shine back by showcasing Louis as the first stand-up comedian to perform on the show.

In 1995, C.K. performed on “Late Show with David Letterman.” Dave liked him so much that he hired Louis as a writer, and he worked there for three months. However, he jumped immediately to “The Dana Carvey Show” where he was the producer and head writer. As if he didn’t have enough experience to write a book about, in 1996 he was brought on as a producer and writer on “The Chris Rock Show” on HBO. His work on this show scored him three Emmy nominations, including a win for Best Writing in a Variety or Comedy Series in 1999.

Born from his work with Rock was a feature film based on the sketches the two did together. C.K. wrote and directed Pootie Tang which, despite negative reviews from critics, became a cult classic. He also co-wrote two screenplays with Rock, Down to Earth (2001) and I Think I Love My Wife (2007).

Where to you go from here, from this point of so much experience and prosperity? Where all good comedians always go back to: stand-up. Amidst getting married and having two kids, C.K. starting making his rounds to comedy festivals in American and Canada. Although he had several failed or never distributed sitcoms, he wrote, executive produced and starred in a sitcom pilot for FX that opened in 2010 entitled “Louie.”

Going back on to the stage seemed seamless for C.K., who had such a rocky start with stand-up. He’s had several one-hour specials including Louis C.K.: Shameless and Louis C.K.: Chewed Up; the latter won him an Emmy nomination for Outstanding Writing for a Variety, Music or Comedy Special.

He has a YouTube channel, and if you want a good look at the type of humor C.K. pulls, you should check out some of his clips. Be warned, Louis C.K. is not a light comic. He doesn’t go with the easy jokes, or the ones that will make you feel warm and fuzzy inside. C.K. makes the hard jokes, the ones you make to yourself but you’re sure are inappropriate. He is a ginger-haired white man who uses his Caucasian race to his advantage.

“How many advantages can one person have? I’m a white man!” It’s the punch line for many of his skits and jokes, and it hits the audience square in the face, but, like I said, these are the jokes that we’re thinking, but unable to say. In particular, C.K. has a story about going to perform to an all-black audience in Hollywood. Based on his name and previous work (particularly Pootie Tang and several collaborations with Rock), producers of the comedy festival assumed he was African American. Needless to say hilarity ensues, at least the way he views his experiences.

His newest special Louis C.K.: Hilarious opens softly and gently enough. C.K. makes his way from the car to the stage where a large crowd greets him with uproarious applause. He opens with a feeble line about saying hello to everybody, and then clarifying what ‘everybody’ entails. But then when he gets going, there’s no stopping him. He jumps right into his recent divorce and the happiness it brings to every recently divorced man.

It is his network television premiere special, and Louis C.K. seems to go where most comedians go with age. Long gone are the jokes of singledom, married life horror tales or anything else men do in their 20s. C.K. takes on some new frontiers, like the much-hated aging process, life as a single father, a divorcee and his politically incorrect views of human behavior. Filmed at the Pabst Theater in Milwaukee, Wis., Louis C.K.: Hilarious is his third one-hour stand-up live concert film.

The film first premiered at the Sundance Film Festival in January 2010 as the first stand-up concert film presented at Sundance. C.K. directed the film and received promising reviews across the board. Louis C.K.: Hilarious DVD is out now, and it’s uncensored and uncut, with over 40 minutes not aired on network television.

He is still ‘shameless,’ though he doesn’t seem ‘chewed up’ any longer. Instead, he is just plain hilarious with a capital H. He doesn’t have any gimmicks, and once you get into his type of humor, you may not be willing to revert to watching any other stand-up comics.