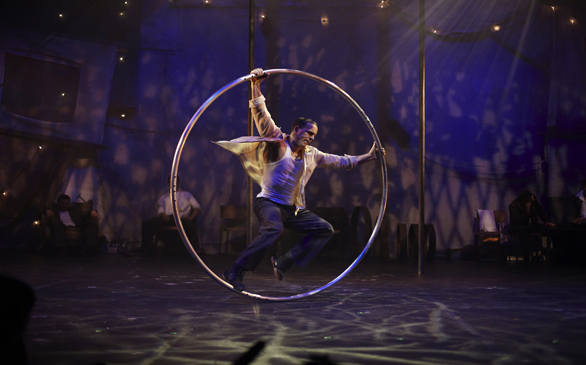 Jumping through hoops to please other people is precisely what San Francisco native Bradley Henderson is up to these days. On the U.S. tour of the acrobatic sensation “Traces,” Henderson and six other performers are set to wow audiences, just as they have done so worldwide.

The tour is making its way to Los Angeles after its first stop in Chicago. With an outrageous combination of skateboarding, hoop diving, wall climbing and piano and guitar playing, the performers keep the action alive on stage.

Henderson explains that while there is not necessarily a solid plot in “Traces,” the show holds meaning nonetheless.

“We’re just trying to touch the audience in any way we can and really express ourselves,” tells Henderson. “We only have an hour and a half to really show the audience everything we can show them.”

“Throughout the entire show, we use whatever there is on stage, whether it’s drawing chalk on each other or on the floor or even telling audience members about who we are in everyday life,” explains Henderson.

Henderson was part of the original cast for four years and now, after a year of resting up, he’s returned to the “Traces” family. In the show, he performs his specialty entitled “Wheel” where he spins by shifting his weight inside a metal wheel similar to a quarter spinning on a table.

His specialty has been in the works for a number of years. He worked on it at the National Circus in Montreal for two years, and he’s been performing the “Wheel” with “Traces” and impressing audiences ever since. After practicing the technique in school, he went on to work with director Gypsy Snider, who helped him build a number for the show to a Blackalicious song.

Henderson’s talents came after years of practice and training. From the age of 9 to 18 he recalls dedicating at least a couple hours of practice every other day to learning skills like Chinese hoop diving and Chinese pole climbing.

“Everybody in the show is an amazing acrobat, but maybe they hadn’t touched upon certain things like Chinese background disciplines that I had been doing since I was really young,” says Henderson.

The seven artists in the show survived a five-month station process for show training.

“All of the performers have been training since they were young, but they [had to learn] their specific apparatuses for this show,” says Henderson. “They were acrobats with separate specialties that they had to offer for the show, but they had to also learn about their new apparatus.”

Henderson loves the entire show, but admits he has one favorite part that really gets his adrenaline going.

“At the very end, when we’re doing hoop diving, it’s just a really fun number for me, because it’s action packed and you really have the feeling that time is running out,” he says.

“The music really pumps you up,” he goes on. “It’s the last number of the show and the audience is with you and you give it everything you got. It’s a powerful number. It’s very fun.”

But with all of these performers diving through hoops and pulling all sorts of stunts the entire hour and a half for eight shows a week, doesn’t it get dangerous?

“I’ve been pretty lucky. I haven’t had any severe injuries where I’ve had to stop the show,” shares Henderson. “Maybe I had to adapt the show a little bit if I had a sprained ankle or a sprained wrist, but I’ve never had to miss a show. At the moment, I’m just trying to do the shows and survive. It’s fun, but it’s hard work too.”