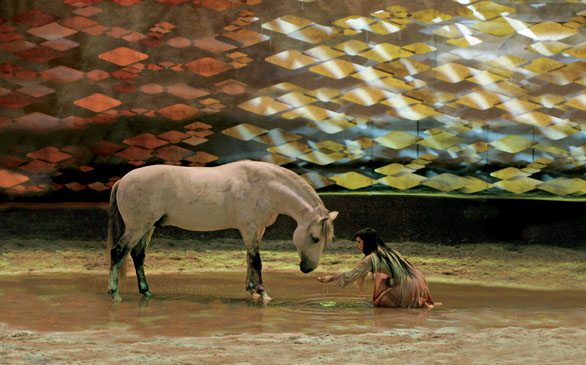 The largest big top in the world is in town, but it’s not the circus. It’s better. It’s the dream world brought to you by Cirque du Soleil founding member Normand Latourelle titled “Cavalia: A Magical Encounter Between Horse and Human.”

“Cavalia” is the place where horses can roam free and interact with humans just like in a fantasy world.

“Cavalia” was last in Los Angeles in 2004, but only one performer and four horses from that cast remain today.

“The show is designed around the horses, so I can say we’ve changed at least 50 percent of the show,” says Latourelle. “So people will recognize the philosophy behind it, but a lot of the show has been totally changed.”

“From one show to the other, there’s a lot of improvisation. I can’t say it’s a new show because it’s the same design, but it’s almost a new show,” he says.

What’s really fascinating about this fantasy world is the work it requires. The show is quite the spectacle. Whereas many touring shows must be prepared to set up the day of, “Cavalia” needs an entire month of preparation and a week to dismantle. The L.A. site is made of concrete, so the tour has brought in 2,5000 tons of dirt to create the scene.

“The stage is the playground for the horse,” explains Latourelle. “They need space to run and to enjoy themselves. They don’t come into a small, confined area like you see in the circus. They come into a big, large area like a playground.”

The humans and horses alike have all trained at the company’s ranch in Quebec for months.

But there’s more to the training than just the physical elements.

The horses have to trust the humans also. Latourelle prides himself on never forcing the horses; he tries to give them as much freedom as possible.

“We’re trying to show the bond between human and horses. Our way is gentle and subtle. It requires a lot of time and patience, but that’s why the horses are happy on the stage. We don’t force them. We bring them in slowly so they do what they wish they will do,” explains Latourelle.

Even if Latourelle can’t control everything the horses do, he admits he doesn’t want to.

“Sometimes the horse is stubborn and doesn’t do what we taught it to do, but sometimes it’s more beautiful than what we wanted it to do.”

Nonetheless, “Cavalia” is set to tour for many years to come.

“There’s so much territory we haven’t covered, and it’s so successful, so we’ll keep it on the road,” tells Latourelle.

It’s been so successful that Latourelle even has a second version of “Cavalia” in the works, set to launch in August 2011.

“It’s going to be a totally different show. It’s too soon to explain, but people are going to be surprised,” he boasts. “The horses will have more liberty and be totally free, no saddles.”

Latourelle is excited to return to Los Angeles. He originally brought “Cirque du Soleil” here in 1987 and, of course, “Cavalia” in 2004.

“Coming back is like a big treat for myself,” he says.