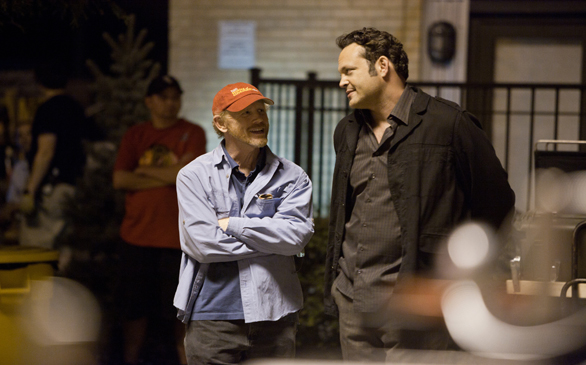 Director Ron Howard and Vince Vaughn on the set of The Dilemma
(Credit: Chuck Hodes)

The Dilemma, starring Vince Vaughn and Kevin James, is about Ronny Valentine (Vaughn) and Nick Brannen (James), business partners and best friends since college who are both with women way too hot for them (Vaughn is paired with Jennifer Connelly, James with Winona Ryder.). But when Ronny discovers his best friend’s wife is having an affair with a loose cannon named Zip (Channing Tatum), he finds himself in the unenviable position of deciding whether or not to spill the beans to his friend, who, he discovers, has a few secrets of his own.

Ron Howard, who directed and produced the film along with his longtime collaborator and Imagine Entertainment co-founder, Brian Grazer, was at a dinner party in Rome during the filming of Angels & Demons when he and Grazer first struck upon the idea for The Dilemma.

“Brian started talking about these crazy scenarios,” Howard recalls. “One of them was, ‘What would you do if there was somebody you cared a lot about, say, your best friend, and you spotted his spouse cheating?’ He said that this idea popped in his head, ‘What if I saw Ron’s wife kissing a guy somewhere? What would I do, and what would be my process in figuring out when and how to tell him?’”

The dinner table erupted in conversation, and soon everyone was enthralled by the “What would you do?” aspect of the query. By the time the plates had been cleared, Howard and Grazer knew they had the basis of a new film, one that would mark their return to comedy after a decade of dramas such as The Da Vinci Code, Frost/Nixon and A Beautiful Mind.

A few months later, during a meeting, Grazer presented the same quandary to Vaughn, who had a similarly impassioned reaction. The star, who also produced the film with Grazer, says, “When I met with Brian, what I connected to was the idea of how you get the information to your friend without destroying him, and, in the process, losing him as a friend.”

Despite the gravity of the situation, Vaughn explains the potential for comedy was intrinsic to such a fraught predicament because of the internal push-pull.

“For me, it wasn’t about whether I should tell him or not. It was about watching someone burdened with the knowledge of what’s going on and the struggle to figure out how and when to tell him. It’s fun to watch a character go through this because you know he has to tell his best friend, but how do you do that? It’s easier said than done, and the dilemma becomes how does one friend navigate it and cause the least amount of damage possible?”

“Questions of infidelity certainly play a part in this story,” Howard adds, “but it also boils down to trust, truth and how much we tell our best friends and loved ones. It makes you think about how much we trust the people who we are closest to.”

While the concept could have veered into dark, sad, dramatic waters, the inclusion of Vaughn and Howard ensured it would stay firmly on a light, humorous path.

“When we were developing the script, people said, ‘This story sounds like a Ron Howard comedy,’” recalls Vaughn. “It felt good to be part of something that brought him back to comedy. Night Shift, Splash, Cocoon and Parenthood are all classics and just fun movies. In a Ron Howard film, you’re going to get sophistication without pretension. He has a great understanding of human behavior and an elegant way of revealing a story that’s not self-indulgent and is very accessible.”

In turn, Howard heaps praise on his star.

“The Dilemma is told almost entirely from Ronny’s point of view. I don’t think there is anyone in modern comedy who audiences would rather see playing a character caught between a rock and a hard place than Vince.”

“Vince has this everyman quality that women love and guys aspire to,” says Grazer. “Whether one of his characters is telling you he’s considering breaking up with his longtime girlfriend or he’s struggling to balance being a dad and a husband, he allows us to explore the rough patches in our lives in funny ways. Through Vince, we see a heightened comic reality of our own lives. I’ve met very few actors who have that ability.”

Another exceptional Vaughn quality is his ability to riff, and ad-libbing became an integral part of the filmmaking process.

“Vince and I had an open communication because I knew what he could bring to the process as an improvisational actor,” says Howard. “He is also great about getting what’s in the script. Vince is a creative guy who understands the whole story and doesn’t want to completely rely on improv. For him, improv is the bonus round that may or may not work, but the script has to be great first; he’s disciplined about that.”

With Vaughn’s considerable comedic talents and given that the film’s nucleolus is a bromance, the casting of his counterpart was a tricky prospect, until the filmmakers brought in James.

“From the first time they met, Vince and Kevin created a great onscreen partnership,” Howards says. “Audiences love to see them when their characters are not necessarily at their best, but are very likable and have this goodness about them. Kevin makes comedy seem so easy, and it comes from a place of absolute honesty. What’s interesting is that he’s at his funniest when he’s upset, vulnerable or misbehaving a bit. Kevin is easygoing, and Vince is extremely verbal and analytical; it is a great combination.”

“I’ve always been a fan of Kevin’s work,” adds Vaughn. “Not only is he hilarious, but he makes it so easy to root for him. He is very genuine and has a warmth and sincerity in all of his performances. On this project I feel like I made a great friend who will be around beyond this film.”

James calls his decision to sign onto The Dilemma “a no-brainer. I have always enjoyed Ron’s films, and Vince is someone I’ve looked up to and wanted to work with because he constantly makes me laugh. It was easy to fall into the best friend dynamic of our characters.”

To fill the role of Ronny’s girlfriend, Howard turned to Jennifer Connelly, who won an Academy Award for her work in the Imagine production, A Beautiful Mind. In recent years, Connelly has staked her claim on more brooding material and might not have been an obvious choice for this sort of romp, but Howard felt it wasn’t “her responsibility to bring the laughs. The character is supposed to make you feel the stakes involved in the story and what there is to lose. Despite that, it’s still a playful movie and a terrific opportunity for Jennifer to show another side of herself. She is whip-smart, very dry and funny, and I was really pleased with what she brought to the role.”

“Ron is an invested filmmaker,” Connelly offers. “No matter what kind of project he is doing, he’s meticulous, professional and cares about his performances. He’s also a great storyteller.”

Asked about the shift from a Howard drama to a Howard comedy, Connelly insists, “Ron’s the same guy. I didn’t really notice a different approach between doing a drama and a comedy [with him].”

The lynchpin of The Dilemma is Geneva, Nick’s philandering wife, played by Winona Ryder, who’s been heavily on the comeback trail following her 2001 shoplifting arrest and subsequent five-year on-off hiatus from acting, with her recent appearances in Star Trek and Black Swan.

“I have always been a fan of Winona Ryder’s work,” says Howard. “She dazzled us and won the role. It’s an unexpected turn for her, and she was excited and challenged by it.”

“The script made me laugh out loud, which is rare for me,” Ryder reveals. “It was funny, but it also had real depth and heartbreak in it, which made for a nice balance.”

As for her director, she decrees, “Ron is the complete package. He is very compassionate and honest and has a great way of giving direction that makes you feel safe. He motivates you and gets so much out of you.”

Perhaps it’s because of his experience as a director of all genres that gives Howard his edge when he steps on to the set.

“There are many moments in the film where you feel like you’re on the edge of your seat and you want to find out what’s going on with the characters,” James explains. “A lot of times, the more serious the moment, the bigger release of the comedy.”

But Howard simply sees filmmaking as his job and reacts to any praise with an “aw-shucks” sincerity that’s pure Opie.

“It’s been 12 years since I focused on making a comedy, and it was flattering and encouraging that comedic actors on the level of Vince Vaughn and Kevin James were interested in my ideas.”

The Dilemma releases in theaters Jan. 14.