The Green Hornet: Seth Rogen gets the greenlight. 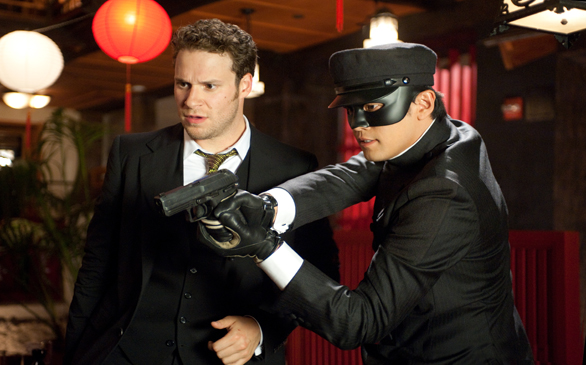 In 2007, when word first hit the blogosphere that Seth Rogen had signed on to write and star in an adaptation of the classic superhero serial, The Green Hornet, the critical response was, if you’ll pardon the pun, rather stinging.

Rogen, then best known as the pudgy star of Knocked Up, reportedly beat out A-listers like Jake Gyllenhaal, George Clooney and Mark Wahlberg for the role of Britt Reid, a newspaper publisher by day and masked vigilante, with the help of his kung-fu kick-ass partner, Kato (played by Bruce Lee in the 1960s series and Taiwanese superstar Jay Chou, in an outstanding American debut, in the update), by night. With his dopey Canadian charm, head of mildly tamed Isro curls and less-than-svelte waistline, fanboys flew into an eviscerating blog campaign against Rogen’s casting.

In response, the now 28-year-old star admits, “[The fan reaction] was a little surprising. I love the idea! I think it’s going to be a unique and interesting movie, but nerds love complaining. You go on [the Web site for] Ain’t It Cool News, and everybody complains about everything. They could find out Jesus Christ was making a movie with Frank Miller, and they’d say, ‘That’s a terrible combination!’”

Adding to the “Seth Rogen as an action star?” frenzy was the addition of Michel Gondry, the visionary director of films like Eternal Sunshine of the Spotless Mind and The Science of Sleep. While some wondered if The Green Hornet would end up being a case of too many wrongs making a right, others feared the film could go down as the biggest mistake in masked crime fighter films since Batman & Robin. But then Inglourious Basterds’ Christoph Waltz, fresh from his Oscar win, signed onto the film’s villain role, early screenings proved to have very positive reactions and the film’s one sheet and trailer were greeted online with a new flurry of comments that knighted them “awesome.”

On a grey Sunday morning, at the film’s press day held on a soundstage on Sony’s lot, the bare walls cast with shafts of green light, Rogen, a slip of his former self, settles into a white plastic chair and says he’s very proud of the film he made and pleased that all the brouhaha has died down. Speaking about the script, which he co-wrote with his Superbad and Pineapple Express partner Evan Goldberg, Rogen says he wanted to break away from the sort of superhero rehashing that has become a staple of Hollywood recently.

Rogen says he has “no interest in doing a very literal interpretation of pre-existing material. I see a lot of these comic book movies that come out now and you almost feel that anyone could pick up the first few issues of a comic book, take it to a DP and say, ‘I wanna shoot this,’ and six months later you have the origin story of most superheroes. That really didn’t interest us in any way.”

After signing on, Rogen and Goldberg began by going back to the radio programs and film serials that began the series and inspired the comic books.

“In the beginning phases, we did a ton of research, just to accumulate ideas. The way we write is, we start by making tons of lists of ideas and thoughts and things we’d like to include in the movie. We tried to listen to almost all the radio serials. They’re a little outdated, I guess. Back then just hearing footsteps for 30 seconds straight was really suspenseful and interesting. The creaking of a door opening was real cinema at that time, but it’s a little hard to sit through hours of it at this point, for me anyway. But I’m very stupid,” he laughs. “We tried to include ideas from all these things, little tips of the hat to the previous incarnation of it.”

Once they had the basis for their story, Rogen and Goldberg felt it was paramount to inject their own sensibilities and senses of humor into the tale, yet at the same time maintain “the things we love about superheroes and comic books ourselves. It was very appealing that there were a few iconic things that people knew about the Green Hornet: Kato, the car, the gas gun, Lenore – but that’s pretty much it. That kind of stuff, we knew we wanted to include, but it was fun because we could integrate them into the story however we wanted and reintroduce them in a way that was organic to our characters and not the previous versions of things.”

The Green Hornet is a film that is very meta. While most superhero stories ignore the existence of the genre, Britt begins the film with a caped crusader doll in hand and often talks about what being a superhero means.

“To us, the thought was, ‘Who’s the guy who’s likely to become a superhero?’” Rogen offers. “Probably someone who reads comic books and is a comic book fan, or is, at least, aware of them. But in the writing we kind of wanted to subvert notions that are in a lot of these comic book movies and that you would find in a lot of early origin stories of comic book characters. I think to play with those ideas, you have to be very aware of what they are in the first place, that they exist and acknowledge them to some degree. We wanted to dance on the line between being a comic book movie and commenting on a comic book movie.”

Of course, you can’t have a superhero without a supervillain, and that’s where Waltz, playing Chudnofsky, a criminal in the throes of a midlife crisis, comes in. But unlike most antagonists, Rogen says, “We wanted the villain to be sympathetic. Our fixation wasn’t how to make this guy scary; we wanted more than anything to intellectually understand why anyone would be so fascinated with killing another person. That’s how we approached it. We wanted it to be funny and when we saw Christoph’s previous work [in Inglourious Basterds], it had elements of danger but, at the same time, was very entertaining and had funny parts. That’s why we thought he would be a good guy to do it.”

Although Rogen describes The Green Hornet as an action movie, comedy was always paramount, even in raging fight scenes and gun battles.

“I always thought it was funny,” Rogen grins, “in, like, the old ‘A-Team’ TV show how they’d shoot 400 people and none of them would die. If you’re going to make a violent action movie, you might as well just go for it.”

Asked if he was ever concerned about the amount of brutality in the film, Rogen shakes his head.

“It’s not explicit, it’s not in any way meant to inspire people to try something similar or instill horrific images, it’s all for the point of fun and big action. It’s funny [Evan and I] watched a lot of action movies leading up to this and what we were fascinated by was how many people die in our average action movie. Like in Transformers, Optimus Prime getting thrown through one building would kill four thousand people and there’s no mention of it, no one cares, no one says anything.”

The actor goes on to reveal that at one point Gondry wanted a dog to be killed during a fight scene and that was where morality took over.

“You can’t do that! My girlfriend would never let me kill a dog. You can’t kill a dog!” he says emphatically.

Asked about other lines not to be crossed, like the very thin one between comedy and parody, Rogen ponders a moment.

“It’s a hard rule to articulate. You just had to be aware that the comedy had to come from the characters, it should all feel real and you shouldn’t feel like you’re being funny for the sake of being funny but that it was something that would actually happen with these people. We tried to approach the structure of the story in a somewhat traditional action movie sense and it was just how the characters related to one another that we hoped the humor would come from. But I remember, with the car, we were like, ‘Inspector Gadget’s car is too far.’ That was our benchmark. We were like, ‘When it starts to become like Inspector Gadget’s car, we’ve gone too far. We’ve crossed the line.’ Little things like that we’d come up with, mostly arbitrarily and we’d break those rules constantly. But it was just fun to say, more than anything.”

Now that fans seem to have gotten behind Rogen as an action star and anticipation is mounting for The Green Hornet’s release, you have to wonder if Goldberg and Rogen held onto any choice ideas for a Green Hornet 2 script. But Rogen quickly shoots down that query with his signature guffaw.

“No,” he laughs. “We’re not the kind of writers to save ideas. If it’s remotely good, we shove it in there. Nor are we confident enough to assume there’ll be a sequel.”